The tennis star responds to offensive remarks about how female players should "get on their knees" to thank male players for "carrying the sport." W. T. F. 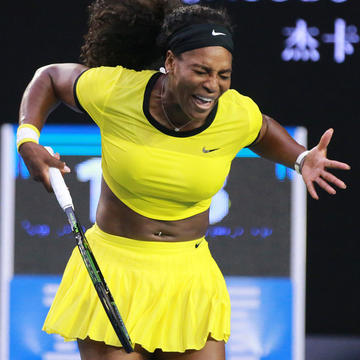 The comments in question came from 69-year-old Raymond Moore, CEO and tournament director of the BNP Paribas Open at Indian Wells. Just before Williams faced Victoria Azarenka in the finals he told reporters, "In my next life when I come back I want to be someone in the WTA [Women's Tennis Association], because they ride on the coattails of the men. They don't make any decisions and they are lucky. They are very, very lucky." Woah. But that's not all.

"If I was a lady player, I'd go down every night on my knees and thank God that Roger Federer and Rafa Nadal were born, because they have carried this sport. They really have," he continued.

No, this is not an article from The Onion. This guy really suggested one of the world's best athletes get on her knees to thank men for her accomplishments. (Clearly this guy picked up nothing from T-Swift's Kanye-slamming Grammy's acceptance speech.)

That's not all. He went on to explain how although Williams is "arguably the best female player of all time," there are a lot of "very attractive players" that can fill her shoes, like Garbine Muguruza. When asked to explain what exactly he meant by "attractive," Moore responded, "They are physically attractive and competitively attractive. They can assume the mantle of leadership once Serena decides to stop. I think they've got ... they really have quite a few very, very attractive players."

When asked for a comment, Williams (who lost the tournament to Azarenka) responded, "Obviously, I don't think any woman should be down on their knees thanking anybody like that. I think Venus [Williams], myself, a number of players have been—if I could tell you every day how many people say they don't watch tennis unless they're watching myself or my sister, I couldn't even bring up that number. So I don't think that is a very accurate statement. I think there is a lot of women out there who are more ... are very exciting to watch. I think there are a lot of men out there who are exciting to watch. I think it definitely goes both ways. I think those remarks are very much mistaken and very, very, very inaccurate." Some other words we'd add here? Sexist, ignorant, and straight-up from another era.

And no, if you're wondering, Williams doesn't think his comments could have been misconstrued: "Well, if you read the transcript, you can only interpret it one way. I speak very good English. I'm sure he does too," she said. "You know, there's only one way to interpret that. Get on your knees, which is offensive enough, and thank a man, which is not—we, as women, have come a long way. We shouldn't have to drop to our knees at any point."

Although the comments hardly dignified a response, Williams also pointed out how women's tennis hardly rides the coattails of men when it comes to ticket sales."Last year, the women's final at the US Open sold out well before the men. I'm sorry, did Roger play in that final or Rafa or any man play in that final that was sold out before the men's final? I think not." Boom.

"So I just feel like, in order to make a comment, you have to have history, and you have to have facts, and you have to know things. You have to know of everything. I mean, you look at someone like Billie Jean King, who opened so many doors for not only women's players but women's athletes in general. So I feel like, you know, that is such a disservice to her and every female—not only a female athlete but every woman on this planet—that has ever tried to stand up for what they believed in and being proud to be a woman," she said.

Of course, Moore later apologized for making comments "that were in extremely poor taste and erroneous," but the fact that someone could even think them in the first place in 2016 remains truly mind-blowing.

UPDATE 3/22: Raymond Moore, who had been the CEO of Indian Wells Tennis Garden and tournament director of the BNP Paribas Open since 2012, resigned Tuesday (effective immediately) after the controversial remarks he made on Sunday about female tennis players. Moore's decision was announced in a statement by Larry Ellison, the owner of the tournament, Washington Post reports.