Dive Right In: Surfing Teaches One Woman How to Live Without Fear | Fitness Magazine
Skip to main content

Dive Right In: How I Found Life Balance Through Surfing

How getting on a surfboard helped me rediscover the balance my life had been missing.
By Katherine Ozment 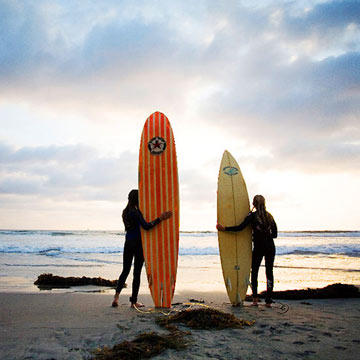 I'm not sure when I became the person who would rather lie on the beach than jump in the ocean, but given a sunny day, a long stretch of seaside, and a blanket, I would often park myself there for hours without dipping so much as one toe in the water. Though I loved the ocean as a child, as an adult, I'd simply rather not get cold, wet, or too close to any sea creatures. Somewhere along the way, my childhood sense of adventure gave way to grown-up worries, both mundane and irrational. So when my friend Adam said he wanted to teach me how to surf, I tried hard to say no.

At the time, we were camped on a beach north of San Francisco with family and friends — the last hurrah for me, my husband, Michael, and our two kids, ages 4 and 1, before we moved back to Boston after living in California for two years.

When Adam plunked himself down on my blanket and asked if I was ready, I feigned generosity: "Me? Please, let Michael go first."

But Adam wouldn't take no for an answer. He handed me a wet suit, which I reluctantly wriggled into, and a surfboard. Then he showed me how to "pop up" — an essential element, apparently, in learning how to surf. In one fluid motion Adam pushed his chest up off the board and shot his right foot forward. I tried to copy him, but it took me about six different, far less graceful moves to get up. I groaned inwardly as he lifted his board and trotted toward the ocean. Half-cradling my board across my chest, I dragged it down the beach.

In cold knee-deep water, I put the board down, pressed myself onto it and started paddling. Thirty seconds in, I knew that my body wasn't made for this. I had done little more than walk-run on the treadmill in the past year post-baby, so what strength I had was in my legs, not my arms or shoulders. But the real problem was in my head. I was scared.

About a hundred yards from shore, winded, soaked, and terrified after slicing through the wave breaks to get past them, I paused to look back at my family and friends, who were eating cheese and sand-flecked figs, scouring the beach for unusual rocks and playing Frisbee. I longed to be there with them on safe, dry ground.

Adam stopped, straddled his board and started to suss out the conditions. I hoisted my body up so clumsily into a sitting position that I was worried my thighs were visibly jiggling through my wet suit, but I finally managed to steady myself.

After surveying the crashing surf, Adam instructed, "You want to be where the wave is going to break; that's where your sweet spot is." But the sweet spot looked messy and dangerous to me, a spectacular spray of white water and foam. The sweet spot, I wanted to tell him, was exactly where I didn't want to be. Hadn't he realized I wasn't a surfer, that of the many doors I've closed — or never bothered to open — this was one I would just as soon leave shut?

Still, I couldn't go back without a few tries. I nosed my board toward the shore and clawed like mad to catch my first wave. I wasn't strong enough, and it rushed under me as if I weren't even there. I tried another and another, watching them all roll into shore without me.

As each wave heaved toward me, I felt a knot in my stomach a foot thick. There was a time when I wasn't so afraid. Growing up, I was a tomboy with two older brothers, and I loved nothing more than the long summer days when my mother would pile us into our AMC Hornet and head to one of the many beaches along the Connecticut side of Long Island Sound. I would bolt from the car straight into the surf and let the waves pummel me, only to bounce back up, laughing, then dive in for more. At night, alone in my bed, I'd feel as if I were still in the ocean, my body rising and lowering, my skin so waterlogged I could taste the sea.

But as I got older, I stopped taking the beach — and a lot of other things — by storm. When I was in sixth grade, my mother and I left Connecticut and moved to Arkansas after my parents' divorce. It wasn't just the ocean I lost. It was also my former, more adventurous self. Now, gripping the surfboard so hard that my fingers ached, I couldn't help but wonder what had happened to the girl who used to run into the waves.

Adam nodded toward the empty space on the horizon where the ocean lifted and fell, and said, "That second one has your name on it."

I paddled with everything I had, my chin tucked down, my body clenched in one tight line. I paddled as if everything in my life suddenly depended on my getting on top of this one wave and riding it to shore. And in some weird way, it actually did.

Then, to my amazement, I found myself slightly ahead of the wave's crest, my arms digging in hard as the water curled up behind me. I panicked, afraid I might actually succeed. In a flash, I was facedown on the wave's slope. Somehow I pressed myself into a low crouch on the board and then carefully rose to an upright stance. It wasn't pretty, but I finally got there. I stretched my arms wide for balance and bent my knees. I'm surfing! I'm surfing! I thought as the wave pushed me along. I flew like when I was a kid riding along on the back of my brother's motorcycle as we sped toward Dairy Queen on a warm summer evening. I flew like when I rode down the Old Bumpety Hill on my blue Raleigh bicycle or bodysurfed on those Connecticut beaches. I flew like when I used to say yes instead of no.

I zipped into shore for 20 seconds, maybe 30, but the experience shook something loose inside me that had been stuck for so long I didn't know it was there. As I reached the shallows, I toppled off the board into the cold, wet froth, lifted myself up and whooped to the sky, arms raised in Rocky-like triumph.

My husband, kids, and friends were cheering on the beach. Soon we would board a plane bound for home. But I couldn't let go of this feeling, not yet. There was someone waiting for me, the person I thought I had lost, and she was a hundred yards out at sea. And so I waved to everyone on shore, lifted myself onto the board and paddled out for more.

That was five years ago, and every summer since, we've headed back to California — and the beach — to vacation with friends. Last summer, after I zipped up my wet suit and lifted my board, my daughter, now 6, looked up from the giant hole she was digging in the sand as I trotted past her.

"Are you going surfing again?" she asked.

Originally published in FITNESS magazine, May 2013.