Why I'm Swapping My New Year's Resolutions for a Bucket List

Let's face it: New Year's resolutions generally suck. But thinking about them in a more positive way could be the secret to sticking with them all year. 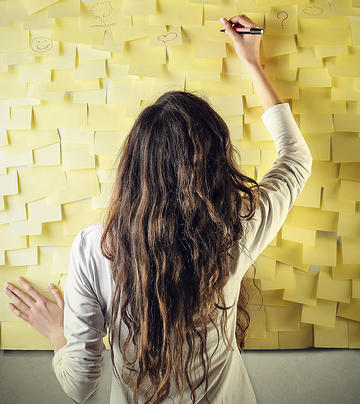 New Year's resolutions and I go waaay back. We're kind of like that on-again-off-again couple that keeps coming back to each other, promising things will be different this time. But we've given it our best—multiple times, if we're being honest—and it's just not working out.

Our relationship history looks something a little like this: Each January 1, I'd sit down with the intention to make this year the year to drop my bad habits. I'd finally quit biting my nails. I'd swear off carbs to lose those last 5 pounds. I'd resist the urge to reach for chocolaty trail mix every afternoon at 3 p.m. I'd have the willpower to not eat a dinner's worth of calories while cooking at the stove.

I'd jot down these bullet points on a Post-it Note. But soon, the tiny piece of paper was forgotten and sentenced to some dark corner of my wallet. Then, January 1 would roll around again, and I'd sit down with a fresh Post-it and rewrite the exact same resolutions. There's always this year, right?

Sometime between feeling like a failure and realizing this cycle existed, it clicked: These resolutions weren't working because each of them focused on depriving myself of something I wanted. The second I told myself trail mix was off-limits, the sweet-and-salty combo was the only thing on my mind.

That's why I'm dropping New Year's resolutions for good. I'm replacing them with a bucket list of goals—a tradition my older sister has had for the past few years. See, a bucket list is a lot like a list of resolutions, but they're framed in a way that will truly get me pumped for the year ahead, instead of dreading it. Resolutions sound so serious, but a bucket list of adventures? I can handle that.

Okay, bucket listy things like "go bungee jumping in Zimbabwe!" aren't exactly on my list (hey, they could be on yours!). But there aren't any negatives, either. You won't find a single "don't," "stop," or "stay away from" in the bunch, and I have a feeling I'll actually hang that Post-it note with pride this time around.