What Pregnancy Taught Me About Exercise 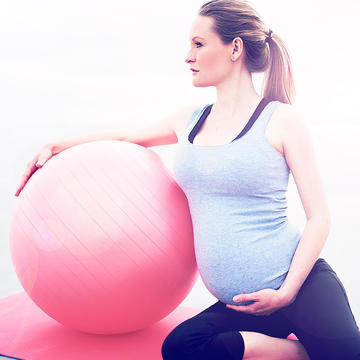 I found out I was pregnant during summer last year— aka peak outdoor running season. Always an early riser, one of my favorite things to do during the week was to crank out a few miles before work and the sweltering heat of the day kicked in. Running not only put me in a better mood (important for anyone who works in New York and has to ride the subway on a daily basis, trust me), but it made my entire day more productive. This is why I always assumed that when the time came to add a baby to my family, I would continue to run throughout my pregnancy.

Yet, once the little bundle was officially on its way, serious fear kicked in. Between over-Googling (there should really be a search engine filter you can put on your computer for any expecting mothers), perusing message boards (OMG never again, seriously), and reading stats on miscarriages and other horrible things that can happen during pregnancy, I became terrified to drink unfiltered tap water, let alone lace up my sneakers and set out on a jog. Even though my doctor gave me the OK to get my sweat on, especially since I had been so active prior to pregnancy, I was convinced that my daily workouts would somehow harm my unborn child. Plus, several friends had told me how uncomfortable exercise had been for them, which led me to think "Why bother?".

While sleeping in and resting was nice for a bit, within weeks of throwing in the exercise towel my mood took a serious turn. I felt sluggish all the time. Sure, I could attribute some of that to growing a human, but I knew that it was more than that. After a gentle nudge from my husband (who no doubt took the brunt of my grumpiness), I started to look into ways to sweat that made me feel comfortable. I still felt I needed a break from running, but I was ready to move again—for both me and the baby. I started with light weight training and low-impact cardio like the elliptical. Within a few days I felt so much better and was hooked on the endorphins. I started spinning regularly (an activity I used to loathe as all I could think about in class was how many more calories I could be burning while running instead of pedaling my way nowhere). But I quickly found that it gave me a chance to crank up the resistance, sweat it out, and still control my heart rate without going overboard. My middle was growing, but I had never felt stronger or more fit, perhaps thanks to the extra weight I was carrying with me as I worked out.

That extra weight also gave me the chance to slow down and enjoy every workout. I clearly wasn't aiming to make it to the top of the leaderboard in my Peloton class so instead, I trucked along at my own pace, enjoyed the tunes, and listened to my body—something I had never done before. Exercising became something I wanted to do, instead of feeling like I had to check it off my daily to-do list. If I woke up and felt like crap, I skipped it and didn't think twice about it rather than wallowing in guilt for the remainder of the day. This made the workouts I did choose to do way more successful and kept my stamina up.

The day I went into labor I woke up and did a 20-minute spin class. I wanted to work out but knew I didn't have it in me for a full 45-minute class, a sign I would have definitely ignored pre-baby bump. That night, my water broke. I'll spare you the details of my 15-hour journey during labor, but when it came time to deliver it was quick (relatively speaking, of course) and my recovery was even quicker. I felt great just a few days later, and I have to attribute a large majority of that to being in shape.

Though I'm far from marathon-running ready, my pregnancy taught me that you don't need to exercise for an hour and a half every day to be fit. A little effort can go a long way if you're doing it right. Even more, I learned that our bodies are tough—like, really tough. And if you take care of it, it will definitely repay the favor and take care of you when the time comes.