Why Is Anorexia Nervosa So Difficult to Treat? | Fitness Magazine
Skip to main content

This is Why Anorexia Might Be So Difficult to Treat

New research sheds light on how those suffering with anorexia or body dismophic disorder experience changes in their brain. 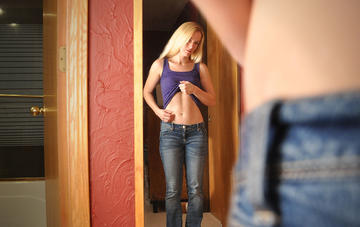 One new study out of joint research labs at University of Illinois–Chicago and UCLA has found another brain difference in those with anorexia nervosa and body dysmorphic disorder. Researchers found that those who suffer with either disorder may lack insight into why their actions could be harmful. Why? Those who suffer are less likely to detect errors in their own thinking, self-reflect about faulty thinking, and monitor potentially conflicting thought patterns. For example, individuals who suffer with anorexia nervosa usually believe they are too fat and are seeking to lose weight even if their weight is already unhealthily low. This research suggests that those affected may actually not be able to see that their weight is unhealthily low or that they do not need to lose weight because their brains are focused on the fact that they feel they are too fat.

These structural differences in the brain may help explain why eating disorders like anorexia nervosa and body dysmorphic disorder are so difficult to treat. One of the hallmarks of eating disorder treatment has been cognitive behavioral therapy (CBT). CBT has been proven to have mixed effectiveness, especially in those suffering with anorexia nervosa. This research suggests why it might be ineffective: The structural differences in the brains of someone suffering with anorexia nervosa doesn't allow them to hold these conflicting thoughts (e.g., "I'm too fat" and "My weight is unhealthily low") simultaneously; thus, they can only hold one belief at a time.

Is all hope lost for those suffering with anorexia nervosa and body dysmorphic disorder? Absolutely not. First, the situation is a little "chicken or egg." That is, we don't know whether the eating disorder caused these structural differences in the brain or whether they existed before the eating disorder. Further research is needed to investigate that. Second, this is just one piece of the puzzle—not the whole puzzle. There are many factors involved in both the causes and successful treatment of eating disorders.

What this research does is reinforce findings that successful treatment usually requires a multifaceted approach. Most individuals suffering with eating disorders need to take medication (like SSRIs) to help alter their brain chemistry so that the therapy (like CBT) can be more effective. The research also helps explain why eating disorders are so difficult to self-treat. Most people cannot heal themselves because they need medication to alter their brain chemistry so that they can begin to think more clearly and logically about their negative behaviors. It's very difficult to alter the brain chemistry of someone suffering with an eating disorder with dietary changes and therapy alone. So if you or a loved one are entering treatment, know that medication will likely be needed until the brain chemistry is altered back to "normal."

If you or someone you love suffers with an eating disorder, please seek help. Chances for recovery are much higher in those who seek treatment, and scientists may provide even more help with successful treatment options in the near future.