Jennifer Lawrence On Why Hollywood's Body Standards Are So Effed Up

The celeb talks about body image in Hollywood, plus how she feels about being called 'curvy' 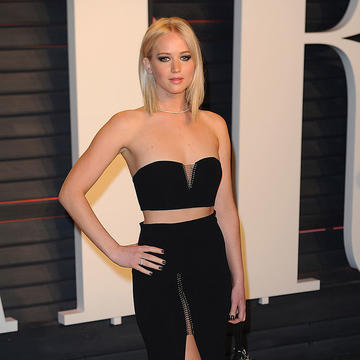 JLaw is well known for her refreshingly honest, no holds barred opinions about body shaming in the film industry. Now, she's speaking out about the messed up body standards in Hollywood yet again—and how she'd like to change how we throw around that word 'curvy.'

"I would like us to make a new normal-body type," Lawrence tells Harper's Bazaar in their May issue. "Everybody says, 'We love that there is somebody with a normal body!' And I'm like, 'I don't feel like I have a normal body.' I do Pilates every day. I eat, but I work out a lot more than a normal person." (Is Social Media Making You Hate Your Body?)

"I think we've gotten so used to underweight that when you are a normal weight it's like, 'Oh, my God, she's curvy.' Which is crazy. The bare minimum, just for me, would be to up the ante. At least so I don't feel like the fattest one," she jokes. And she's right—if you've seen her on the red carpet lately in one of her many ab-revealing looks—you know that she's in crazy good shape, but she's hardly what comes to mind when we think of the average 'curvy' woman in America.

Yet, this body image conversation is one that Lawrence is clearly deeply invested in—she's been speaking out against fat shaming on and off the screen since she first skyrocketed to Hunger Games-level fame. "And the word 'fat'! I just think it should be illegal to call somebody fat on TV," she told Barabara Walters in her '10 Most Fascinating People of 2013' special. "If we're regulating cigarettes and sex and cuss words because of the effect it has on our younger generation, why aren't we regulating things like calling somebody fat?" And last year, she spoke out again about the struggles of weight in the industry at Comic-Con.

Like her campaign for equal pay in Hollywood, it may seem ironic that Lawrence—whose reached pretty much untouchable A-list status at just 25-years-old—has taken up this crusade, but Lawrence is nothing if not self-aware. Sure, she may have 'poor rich girl' problems as she likes to say, but the bottom line is that this stuff affects ALL women, day in and day out, and any celeb that wants to get behind the cause is a baller in our book.