Chrissy Teigen Confesses to the Magic of Latex, Spanx, and Waist-Trainers Post-Baby

The model gets real about the infamous post-baby body bounceback. 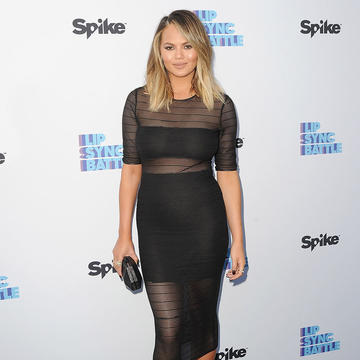 If you saw Chrissy Teigen in Fergie's new M.I.L.F.$. music video (or in recent photos rocking bodycon-esque dresses) you wouldn't believe the model and cookbook author had a baby just three months ago. But don't jump to any conclusions—according to Teigen, she hasn't "snapped back" to her pre-baby figure quite yet.

"I'm not back yet by any means," she told People. "I think people think that I've snapped back, but I really have just in fact been utilizing undergarments more than ever."

"I never was a Spanx person or a waist trainer person. Now I do it. It looks great on the outside, but trust me, I'm a bit soft," she goes on to say. The waist-training trend for weight loss is nothing new—Jessica Alba used one to lose weight after her pregnancies as early as 2011, and Teigen's friend Kim Kardashian is perhaps one of the biggest celeb supporters of the method. (Although, doctors warn the pressure on organs can cause serious health issues.)

When it comes to that cameo in Fergie's video (which also shows Teigen breastfeeding her newborn, Luna), she says the secret is latex. "Everybody is talking about how we were all Photoshopped. No, latex is another being. You've never seen anything like it," Teigen says. "Latex gives where it needs to give and cinches where it needs to cinch. It's like magic."

Consider this your reminder that while celebs have access to some of the best trainers and nutritionists, they're still human. And nobody needs to worry about their post-baby body three months after giving birth.