The newest fitness craze focuses on strengthening your brain. Here's how to play your cards right and build more mental muscle.
By Joanne Chen 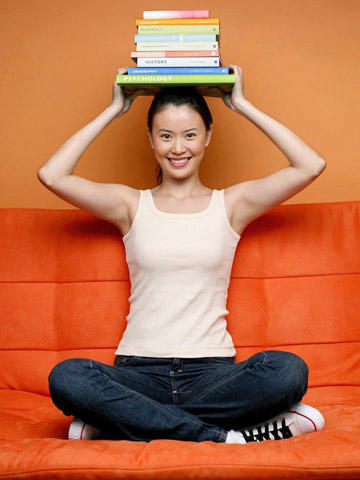 Get Your Brain to the Gym

I know what to do when my thighs get a little jiggly (hello, squats and lunges), but what about when the trouble zone in question is a little higher up — like on top of my shoulders? I'm talking about my brain, which has gotten noticeably flabby in the past few months. Suddenly it was taking me several minutes to figure out how to cook Minute Rice. Names of celebrities spent more time on the tip of my tongue than rolling off it. "You know who I'm talking about, right?" I would ask my husband. "That actor in that hit movie.... That guy?"

The one thing I did know: It was time for a brain-boosting intervention. So when I got an e-mail informing me that I had been selected to join the tens of millions of women and men who have plunked down money for the privilege of becoming a member of an online "brain gym," where I could play interactive games that are scientifically designed to sharpen the mind, I was intrigued.

Turns out, most of the people who belong to these gyms are looking to ace their LSATs, be wittier at networking events, or fast-track themselves up the corporate ladder. In fact, 75 percent of Lumosity's 40 million members are under age 40, and they're flocking to daily 15- to 20-minute brain workouts as enthusiastically as they flock to Spinning classes. Today a brilliant brain is just as worth training for as is a J.Lo butt. What could I do but pony up $15 for a monthlong course?

Speed Match, where you indicate whether a shape matches the one before it, sounds simple enough, but I keep pressing the wrong arrow. My mind drifts to the chicken I need to defrost for dinner, which, of course, means I tap the wrong key again. I get so flustered that I forget to remember the next shape flashing before me, and the next. I panic. At the end of each session of approximately five games, I'm given a breakdown of my brain-performance index. My attention-capacity score — 177 — is especially dismal; it's in the bottom fourth percentile compared with other users my age.

Yikes! But, hey, I'm not stupid. My misunderstood brain and I decide to question the experts.

I soon learn that there are two types of intelligence: crystallized and fluid. Crystallized intelligence is the knowledge you learn from school and life experience; it gets better with age. Fluid intelligence is how you solve problems in new situations; it depends on your ability to focus, remember, and think creatively and logically. It's what IQ tests assess.

"So what does it mean if, ahem, a friend scored poorly on a brain-gym test?" I ask Susanne Jaeggi, PhD, an assistant professor of psychology at the University of Maryland.

"These games don't necessarily reflect how intelligent people are," she replies. "Those who do better know how to play the game better."

In fact, most brain-gym tests don't actually promise to enhance fluid intelligence, I discover. Instead they claim to help increase certain aspects of it. That hedging is due in part to the newness of brain training. Experts only recently realized that the adult brain can grow new cells, for example. At the same time, fears of Alzheimer's disease have fueled the quest for brain-enhancing techniques. Plaques and tangles, the hallmarks of Alzheimer's, may begin showing up in your thirties, points out Gary Small, MD, a professor of psychiatry at the University of California, Los Angeles, and a coauthor of The Alzheimer's Prevention Program. "You need to stem the growth before they become a problem decades later."

No wonder brain training has become a billion-dollar industry.

Newly motivated, I jump back on the computer to work harder at building my mental muscle.

I'm improving my score, mostly because I've come up with a few tricks. In the game Familiar Faces — where customers pop up at a food shack, and players earn points by remembering their names and what they ordered — I look for distinguishing features. Linda's haircut resembles an L, for instance. In Word Bubbles, where several letters appear on-screen and the object is to come up with as many words starting with those letters as possible, I develop a system: Instead of typing words at random, I follow up each entry with any variation I can think of: care, cares, caring, careful. Pretty clever, eh? My points rack up like crazy.

Brain training can help you perform at your best in real life by strengthening certain neural systems, advocates say. "The brain has an incredible capacity to adapt," notes Sheida Rabipour, a graduate student studying neuroscience at McGill University in Canada and the lead author of a recent review on the topic. "The more you train to improve a skill, the stronger the networks underlying that skill become."

In other words, practice makes perfect — or in my case, practice makes habit. After forcing myself to pay attention almost every day to the customers in Familiar Faces, my mind automatically shifts to "play" mode when I meet people at a real-world cocktail party. I study their faces, really listen to their names, and search for associations. And what do you know — it works!

But not everyone is a fan of brain training. The biggest criticism: Just because a person gets smarter at playing games, it doesn't mean she gets smarter in general. Sadly, it seems I will not suddenly develop the capacity to solve the national debt crisis or perform other acts of brilliance. The skills needed for that use an entirely different set of brain circuits. "Brain training doesn't work," says Adrian Owen, PhD, a professor at the University of Western Ontario. "There is no evidence that brain training makes you any smarter. Even if you get better at the games, research suggests that this skill will not transfer to anything else."

Still, some scientists believe they are on the verge of creating brain workouts that can channel everyone's inner Einstein. A game that requires you to pay strict attention and that strengthens your working memory — the short-term memory required to retain information long enough to solve problems — can help make you adept at deciphering new dilemmas, Jaeggi explains. In other words, you really will become smarter.

As I play a brainteaser called Raindrops, in which math problems appear in drips of water and I have to solve them at warp speed before they fall to the ground, I swear I do feel more intelligent. And while I know that being good at a computer game doesn't automatically translate into real-world ability, I figure it has to be better than not playing at all.

Soon I'm advancing to more rigorous levels for every game. My score dramatically improves on a tough test called Memory Matrix, in which I'm asked to remember patterns that appeared on a computerized grid. Woo-hoo! Will I be coming back for more? You can bet on it.

I'm having such a good time that it almost doesn't matter whether my brain has been boosted. But it has gotten stronger: Over the course of a month, my average score has increased 36 percent; the "attention" area, my weakest from the start, has shot up 58 percent.

Off-line, I can happily report that I mention Bradley Cooper by name when asking my husband to add Silver Linings Playbook to the Netflix queue. Also, I now pay much better attention when I'm reading. That has helped me to become more time efficient with work and to converse more fluently on current events.

So am I actually smarter? Probably not. But the appearance of intelligence sure makes me feel better about myself. And if that's not genius, I don't know what is.

7 Smart Secrets
A better brain is not just fun and games. Try these tips to tone your mental muscle.

Stay hydrated. The brain is 80 percent water, says Daniel Amen, MD, the author of Use Your Brain to Change Your Age. If you don't drink enough H20 throughout the day, its volume can shrink slightly, which will make it harder for you to concentrate. Aim for about eight glasses.

Calm down. Stress hormones change the brain's prefrontal cortex, which can affect memory, attention, and decision making, studies show. Whenever you start to feel frazzled, breathe deeply or meditate for a few minutes.

Lace up your sneakers. Thirty minutes of exercise three times a week has been found to improve memory, decision making, and brain health, says Art Kramer, PhD, a professor of psychology at the University of Illinois at Urbana-Champaign.

Sleep seven to eight hours a night. Snoozing for less than six hours or more than eight impairs reasoning and vocabulary.

Learn new skills. Master a foreign language or a musical instrument to help your mind flourish. And turn off your GPS; in a study at McGill University in Canada, people who regularly created a map in their mind had a more active hippocampus, the area where learning takes place.

Hang with your friends. Have weekly dinners with pals. Take classes at the gym. Go to parties. When scientists studied 80-year-olds, they found that those who were the most social had suffered 70 percent less cognitive decline than the least social of the bunch.