Obsessive Compulsive Disorder (OCD) isn't about having a clean room and organized planner. One woman explains what it's REALLY like, and offers treatment tips for those who can relate. 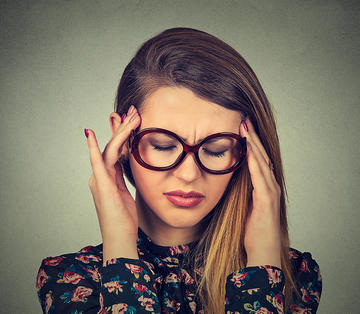 This is something I hear all the time. It's a pretty common expression, often used to describe the "type A" way someone handles a situation. While it never really seems to be used derogatorily, it can be frustrating to hear when I know the person doesn't actually have OCD. I know because I lived it.

Obsessive-Compulsive Disorder (OCD) is defined by the National Institute of Mental Health as a "common, chronic and long-lasting disorder in which a person has uncontrollable, reoccurring thoughts (obsessions) and behaviors (compulsions) that he or she feels the urge to repeat over and over." While it affects everyone differently, it can be incredibly debilitating and interfere greatly in sufferers' day-to-day lives.

I began showing signs of Obsessive-Compulsive Disorder in elementary school. Different compulsions and rituals took up an increasing amount of my day, and it got to the point that I couldn't leave the bathroom without turning on and off the lights 20+ times, not stopping until it "felt right." Mental obsessions also came into play; I was obsessed with the safety of my family and the idea of death, and had to do a number of rituals, physical and mental, that would keep them safe. I can remember my 10th birthday party being a bit of a bummer because I felt a small lump in my chest and became obsessed with the idea that I had breast cancer. At 10-years-old. Although I could rationalize the small probability behind this self-diagnosis (people with OCD are often able to realize rationally that their worries or compulsions are not realistic), I couldn't shake the recurring thoughts.

My parents took me to a therapist, and as I grew older, the symptoms lessened more and more. By the time I reached my teenage years, the physical compulsions had all but abated. I still had to deal with the obsessive thinking, and to this day, at 26-years-old, it can be difficult to let a thought or worry cycle out once it's begun. This obsessive thinking was once explained to me as a Ferris wheel. In someone without OCD, a thought or worry might circle around a few times, but eventually, it reaches its end and exits the ride. In someone like me, the ride just kind of keeps going and the exit door can remain jammed for a long time. Despite this, I am able to live a happy and productive life; one in which, I am fortunate enough to say, OCD has played less and less of a role.

Unfortunately, many people's symptoms remain or worsen over time. Shows like MTV's "True Life: I Have OCD" have depicted what it can be like living with a severe case of the disorder. The compulsions and obsessions can completely take over your life, and often people do not seek treatment due to shame or hopelessness. There is a stigma against mental illness in this country, so it is important for people to know that OCD is nothing to be ashamed of and that no one is ever beyond hope. There are steps that can be taken to lessen the symptoms, outside of medication, even in the most severe cases.

When it comes to seeking therapy, Clinical Psychologist Ali Mattu, Ph.D., offers this insight: "Exposure and response prevention is the most effective therapy for Obsessive-Compulsive Disorder, which relies on a process called habituation," he says. "Think about the last time you went for a swim. The water may have felt cold at first, but if you stay in the pool, it doesn't feel as cold. That's habituation. When you stay in a situation, you get used to it."

With OCD, this therapy works by helping people face the type of situations they fear, experience their obsessions fully, and avoid engaging in any ritual. I used to think something terrible would happen to my family if I didn't say my prayers correctly at night. I would stay up for hours, saying them over and over. Once I stopped saying them compulsively and realized nothing bad happened, I was able to recover. "Brain imaging research has shown that this type of treatment can reduce the intensity of fear in the brains of people who have OCD," says Mattu.

Day-to-Day Tips for Coping with OCD

There are many things you can do every day to help cope with and overcome the symptoms of Obsessive-Compulsive Disorder. Shielagh Shusta Hochberg, Ph.D., provides these tips: