How to Conquer Your Most Common Fears

Isn't it time you faced up to whatever scares you? Follow our rules to live a bolder, better life.
By Nicci Micco 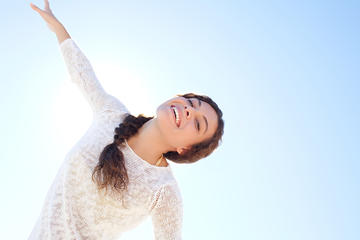 People tell me that I come across as a confident person. It's true that I have no trouble speaking up at meetings, mingling at parties, even asking for a raise. But those close to me know that the mere idea of navigating a car through Manhattan (or any large city) makes my heart race and my palms sweat. And that I don't go into the ocean past my ankles because, well, sharks are there, waiting. To eat me.

Some people are less prone to panic than I am — because of their genes or experience or, more likely, a combination of the two — but everyone experiences fear. This universal emotion registers in a part of the brain called the amygdala, which detects danger and dispatches a "code red" message that results in a cascade of physical symptoms: a racing heart, dizziness, shortness of breath, a dry mouth. You're ready to run. Or fight. Or maybe you freeze.

All three responses served our ancestors, who needed to evade and escape predators. Problem is, our scary situations have evolved, but our body's alarm system remains largely the same. "The brain just hears 'threat,'" says Simon Rego, the director of psychology training at Montefiore Medical Center in New York City. "It doesn't differentiate between a lion running up to you and your boss asking for a report." You're primed for action, but unless you're the star of a reality show, you're not going to hit anyone or sprint away. Instead you stay put and think about how scared you are.

Anticipating intimidating situations, such as the toast you have to give at your sister's wedding, also creates fear. So does imagining catastrophes, like a car accident or cancer. A little apprehension is a good thing, because it makes you fasten your seat belt and wear sunscreen. But when it goes too far — an aversion to giving presentations costs you a promotion, or anxiety about flying means that you hardly ever see your niece — it's time to fight back. Learn how to conquer a few of the most common fears.

You're Scared of the Not-So-Friendly Skies

A phobia is an intense, illogical fear of something. It usually starts when we're children or young adults. Sometimes the trigger is obvious. Nicole Albano, 34, a publicist in New York City, knows exactly what sparked her fear of flying: the movie Final Destination. After seeing the film, the slightest bit of turbulence during takeoff called to mind the opening scene, of a horrific plane crash. "It got so bad that I refused to fly for seven years. It was debilitating and depressing," she says. Then Nicole landed a job that required a lot of travel. Her career at stake, she enrolled in a Fly Without Fear course at La Guardia Airport in New York City, in which she listened to pilots, flight attendants, and mechanics explain how planes work, why they make the noises they do, and the comprehensive safety checks required of the crew. "Flying still isn't a pleasant experience, but I'm back up in the air — sometimes several times a month and overseas too," Nicole says.

Conquer It: Give Yourself a Reality Check

What's the lifetime likelihood of dying in a plane crash? One out of 7,178. Of being attacked by a shark? Less than one in 264,000,000. Often the odds are so tiny that knowing what they are may help to invalidate those fears, says Michelle Maidenberg, PhD, a psychologist in Harrison, New York.

Conquer It: Get Informed

Check your local airport for classes like the one Nicole took. Or consider taking the online courses offered by Ron Nielsen, a professional counselor and former commercial pilot (fearlessflight.com).

Public Speaking Is Your Worst Nightmare

School psychologist Elisabeth D'Amato, 35, of Wethersfield, Connecticut, is no stranger to speaking in front of a group, but every time she has to give a presentation to staff or students, anxiety sets in. "About an hour beforehand, I start feeling nauseated and sweaty," she says. The symptoms once sabotaged Elisabeth's performance so completely that they cost her a job. "I bombed at an interview," she says. "A member of the review committee told me I was one of the worst interviewees he'd ever seen."

Worrying about screwing up in a high-pressure situation makes it more likely that you actually will, says Sian Beilock, PhD, the author of Choke: What the Secrets of the Brain Reveal About Getting It Right When You Have To. "Our worries eat up brainpower that's better spent on preparing for the event," Beilock says.

While Elisabeth still gets nervous when she has to speak to a group, she has learned how to control her behavior so that no one else notices. Her tricks: taking deep yoga breaths before the event and fiddling with a paper clip to channel nervous energy while she talks.

Conquer It: Practice Under Pressure

Rehearsing in your head isn't enough. Run through your presentation with a coworker, record yourself with your webcam, or practice in front of a mirror.

Conquer It: Psych Yourself Up

When you start to experience the physical symptoms of stress, try to label them as excitement ("Let's go!") rather than fear ("Oh, no!"). Easier said than done, for sure, so remind yourself by writing a go-get-'em phrase like "You got this!" at the top of your speech notes.

Setting aside a few minutes a day to cultivate mindfulness — the awareness of what's happening in the present — trains your brain to slip into a calmer way of seeing the world when fear strikes, says Britta H?lzel, PhD, a researcher at Massachusetts General Hospital in Boston who has studied meditation and fear. "The moment you stop trying to control or suppress your emotions and let go of resistance, the body's natural physiological response is to quiet itself," she explains. Here's how: Sit comfortably with your eyes closed. Focus on your breath, observing the physical sensations that occur as you inhale and exhale. Concentrate on those sensations without judging them. When thoughts or worries surface, acknowledge them and bring your focus back to your breath. Start with five minutes a day and build up to 20.

More Common Fears and How to Conquer Them

You don't sign up for races because you fear finishing last; you steer clear of yoga because you might not be able to do the poses. For many women, the threat of struggling in front of others prevents them from trying new things. "I didn't want to be the girl who couldn't make it up the hill," says Marie Elia, 35, a librarian in Pittsburgh who started commuting by bike only after her boyfriend persuaded her to. Once he pointed out that it's really no big deal to push your bike when you have to, Marie started noticing all the other people who did, and she remembered them whenever she felt silly for hopping off.

Getting over that first hurdle can be even harder if you've been burned before. "I sprained my knee the first time I went downhill skiing," says Carolyn Tesini, 37, a writer in Brunswick, Maine. "I was terrified of hurting myself again." After a 15-year hiatus, Carolyn started cross-country skiing on flat terrain. Once she felt comfortable, she bought alpine touring skis, which are more like downhill skis, and ventured out on her favorite hiking trails. "There weren't many people on the trails, and gliding through the trees was peaceful," she says. "Since I started, I've gone down hills I never imagined tackling."

Conquer It: Surround Yourself with Support

Enlist someone you trust to show you the ropes. Or band together with other beginners: Take a snowboarding lesson or sign up for races that cater to newbies, such as the Athleta Iron Girl Event Series (irongirl.com).

Conquer It: Encourage Yourself

As you're cycling or doing whatever else makes you nervous, whisper words of encouragement to yourself, like "I'm doing great." And acknowledge achievements no matter how small, suggests Maidenberg, who says, "At the end of every activity, tell yourself, 'I did it!'"

You Worry About Fires, Terrorism, or Other Catastrophes

For many of us in today's economy, the sight of our boss in a closed-door meeting is enough to trigger the fear that budget cuts have eliminated our job. Turns out, simply hearing about corporate downsizing (or terrorists or tsunamis) may be enough to stoke your anxiety. In fact, research at New York University suggests that watching someone else's scary experience can activate the brain's fear center. So, essentially, fear is contagious, says study author Elizabeth Phelps, PhD.

Conquer It: Ground Yourself in the Present

If the things you worry about aren't current realities, bring your mind back to the present moment by meditating on what you see, hear, and feel right now, suggests Melanie Greenberg, PhD, a psychologist in Mill Valley, California. See "Meditation 101," on the previous page, for tips on how to do it.

Conquer It: Get Your Game On

When you're imagining scary scenarios ad infinitum, busy your brain. A study from the University of Oxford found that playing Tetris within a half hour of watching a video of traumatic scenes reduced flashbacks to the film during the following week. That's because a game that requires visual and spatial reasoning pulls power from the part of the brain that consolidates visual memories, so they're less likely to spring to mind. Not the gaming type? Try knitting or a jigsaw puzzle, which will do the same thing, says study author Emily Holmes, PhD.