How Acroyoga Helped Me Get Out of an Unhealthy Relationship

The playful practice of acrobatic yoga shined a light on everything wrong in my relationship. 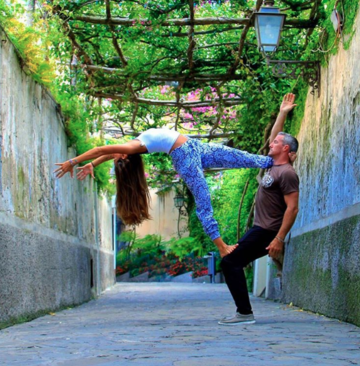 I should have known something was wrong—way wrong—with my on-and-off relationship (one that had lasted four years) when I found myself looking forward to being touched by someone else. But I didn't. Because it's not like I wanted to be touched in a kinky, sexual way. Rather it was a physical, technical touch that involved understanding and feeling parts of my body (oh hey, sacroiliac joints) that I never knew I had before falling into Acroyoga.

Founded by Jason Nemer and Jenny Sauer-Klein in 2003, Acroyoga—which fuses yoga with acrobatics and pairs you with a partner—has gained massive popularity as a means for not just yogis, but couples looking to connect. Case in point: Loyola University Health System's Sexual Wellness Clinic in Chicago recently added 90-minute partner-yoga sessions after studies showed practicing yoga increased women's arousal and sexual response, and improved men's sexual satisfaction and stamina. Not to mention that four of my teachers (two pairs of married-up people) met or had their first date at Acro, then developed their relationship and practice simultaneously.

This is exactly how my intimate love affair started and current relationship ended. Acroyoga was the precursor and catalyst.

It was an innocent bike trip through the park with an acquaintance (we'll call him G) whom I'd occasionally gone to more mainstream yoga classes with. We shared a similar interest for mind-body awareness, and found common ground in unconventional forms of thinking and paradoxes (all things that my romantic relationship with J lacked). While we were riding, we came across a group of Acroyogis balancing on each other's bodies. He was shocked that, at the time, I had never heard of it.

So we went back to my place...and watched YouTube videos that taught us how to do Throne pose (an easy position for beginners). We practiced and practiced for hours, until we were both basically at mastery level.

Throughout the next couple of weeks, I found myself making more time to play with and discover what my body was capable of with this guy. I even caught myself lying on a Friday night, telling J that I was going to a full-moon group yoga gathering on the beach, when in reality it was one-on-one time with G, trying different Acro positions in my apartment. I felt guilty about the lie, but not enough to stop me from doing it—there was something about practicing with him that lit a fire in my belly. Not only was I learning more about my body and becoming more comfortable in it, but I was also learning how to move in tandem with someone, constantly acting and reacting to one another's touch in a positive way. It was new for me, and I wanted more of that feeling.

Then, as I was heading out the door for my fictional "group gathering," J said something that made me hesitate. "I really love how much you've committed to yoga lately."

That word sliced through me like 100 knives. At this point, we had known one another for a decade, and half of that time was spent in a sexual or romantic relationship. There shouldn't be off-and-on anymore, I thought. There should be no hesitation or resistance. It should be like my yoga practice: Challenging at times, but innately fluid.

Commitment, after all, is what holds a yoga pose together. When your mind is telling you to give up, that connection to something deeper keeps you from breaking out of it.

Looking back, I think that's when I knew it was never going to work with J. It was confirmed later that night, though, when G and I had enjoyed a few bottles of wine and playfully performed strip Acroyoga (as in, whoever messed up or dropped the other had to take something off). While in the middle of a move that required me to lift him up with balance and control, G inclined his weight down to kiss me—and I didn't hold back.

In my head though, I was feeling torn. Did I really want to leave my relationship behind? The only thing I knew for sure was that I wanted to keep doing more Acro—and I wondered if I could capture the same feelings I had doing Acro with G, with my boyfriend. So I asked him to try—at the beginning of our relationship, we'd make it a point to try new fitness activities together, so we might be able to reignite that excitement...or so I hoped. J wasn't having any of it though and, despite my constantly trying to get him to experiment, I was regularly met with rejections and excuses of being too tired and uninspired.

Finally, after about five attempts, I convinced J to give Acro a go. What happened next was eye-opening, to say the least. I realized that, even in Acroyoga—a practice that is based off trust, communication, playfulness, and being present—J and I couldn't see eye to eye. The problems we had in our relationship—the demand for control, an inability to let go, failure to express what we were feeling—they all transferred to the mat and brought us tumbling down over and over again.

That's when it hit me: The body doesn't lie. On the most basic and fundamental level, it was as simple as realizing we weren't in sync. On a more complex, metaphorical level, if we couldn't effectively communicate our feelings to avoid physical injury during a practice that increases muscle relaxation and releases endorphins in the brain (um, much like sex), how would we ever catch or lift each other up when one of us was internally faltering?

In short, we couldn't.

Whether I was unaware before or just in denial, I'm not sure. But I finally realized that J and I were disconnected. I had been settling because I was afraid of letting go of the comfort and security I had found in our long-term relationship. I was scared of losing control and being vulnerable. But I needed to expose myself to all those things because I realized it's exactly what I want: To fall deeply, madly, truly in love. He would always ground me, yes, but that's the funny thing—I never want to be grounded.

In Greek, Acro means high or elevated. Isn't that what we all want—in life, love, and yoga? To reach new levels of personal growth and consciousness with someone who will take us higher than we've even gone before? G and I may not have ended up in a happily ever after, but he did introduce me to Acroyoga. And it ended up being the best thing for my body—and life.