Hospitals are reporting a spike in births almost exactly nine months after the World Series. 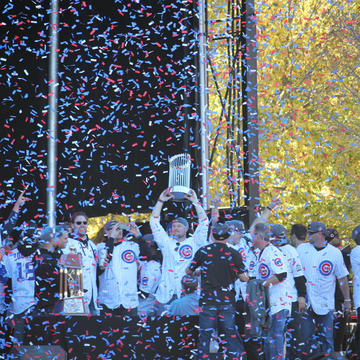 It has been almost nine months since the Chicago Cubs won the World Series for the first time in over a century. While that day has gone down in history for Cubbies fans, it's brought with it an unexpected surprise: a huge spike in births in the Chicago area.

According to the Chicago Tribune, Chicago-area hospitals have noticed a lot more babies being born and the timing seems to line up perfectly with the World Series.

At the Advocate Illinois Masonic Medical Center, for instance, doctors are saying they've noticed the number of deliveries going up and expect the trend to continue through August, the Chicago Tribune reports. Melissa Dennis, M.D., vice chairwoman of obstetrics and gynecology at the center said that the highest surge happened between July 10 and 18, where the number of deliveries nearly doubled compared to previous years. (Related: This Pregnancy Woman Deadlifted 200 Pounds AFTER Her Due Date)

Sure, there are no scientific grounds to conclude the birth increase is directly related to the World Series win, but Dennis notes that the surge has happened exactly 38 weeks after Game 7. An average pregnancy is between 38-40 weeks. (Coincidence? We think not.)

"Whether it's the natural ebb and flow of labor and delivery or the Cubs celebration?" Dennis told the Tribune, "We can leave that up to the imagination."

The Cubs seem to be thrilled about "The World Series babies"—the team sent Clark, their mascot, and The World Series trophy to the hospital to congratulate the parents on their newborns, offered the babies complimentary fan club memberships, and plenty of swag including Cubs pinstripe beanie caps and "Rookie of the Year" onesies.