Many women are hesitant to try strength training, despite its proven benefits. Why can't we get with the fitness program?
By Sarah Richards 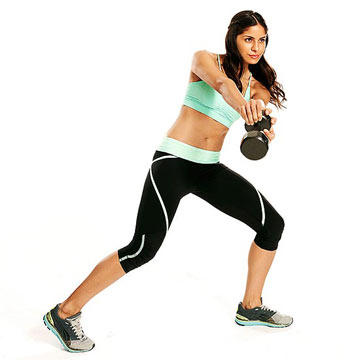 When the weather is nice, New Yorker Janelle Anderson heads out to Central Park for a four-mile run past the scenic urban skyline. When it's not, she takes her workout into the pool and swims at least one mile. But spend a half hour in the weight room or even doing some basic push-ups or squats at home? Not likely.

"I've never stuck with a regular weight routine long enough to see big changes, whereas when I go for a run or a swim, I feel better right away," says Janelle, a 33-year-old venture capitalist. "I know lifting weights is good for me, but I just can't make myself do it on a consistent basis. It's hard enough to find the time to exercise, let alone fit something into my routine that doesn't seem to have a real payoff."

More than six million women who regularly work out share Janelle's sentiments. Despite the universally acknowledged health benefits of resistance training (and there are scores, from reducing blood pressure to warding off arthritis and strengthening bones, muscle, and connective tissue), of the 12.7 million women who belonged to a commercial health club last year, only about half used weight machines and only one-third lifted free weights, according to the International Health, Racquet and Sportsclub Association (IHRSA). Although those numbers are up slightly from four years ago, they're still low.

That's why experts want to get the message out that weight training -- even just two times a week -- is an essential part of the total wellness package. "We need to make it clearer that for both optimal health and fitness benefits, women especially need to do a combo of aerobic and strength training on a regular basis," says Dixie Stanforth, a lecturer in kinesiology at the University of Texas. Here, surprising new research on how weight training can change your body, boost your mood, even keep you looking younger.

There are literally hundreds of studies published each year expounding on the payoffs of resistance training. Researcher William Kraemer, PhD, a professor of kinesiology at the University of Connecticut School of Medicine, has authored dozens touting the benefits for women in their 20s, 30s, and 40s. Some of the benefits, like improving muscle tone, bone density, athletic performance, and strength (about 30 to 50 percent more after three to six months of training), are obvious. But there are a few surprises: Resistance training helps women fight the aging process by maintaining lean muscle tissue. Women who regularly lift weights have better self-esteem and get sick less often. Others have found weight training improves the way the body processes sugar, reducing the risk of diabetes.

For women who want to lose weight or prevent weight gain (and most of us fall into one camp or the other), strength training is key: In our mid-30s, we begin to lose 5 to 10 percent of muscle strength each decade. Since muscle burns an estimated three times more calories than fat, adding two to four pounds of muscle can translate into an extra 100 calories burned each day. A high-intensity strength routine has been shown to bump metabolism by 20 percent for several hours post-workout.

Couple weight training with cardio and the benefits are exponential. One study found that women who did 25 minutes of step classes plus a total-body resistance routine for 12 weeks significantly reduced their resting heart rate, body-fat percentage, and blood pressure, and increased their strength and endurance significantly more than those who only did aerobics.

Finally, there's the reality that when you have more strength, many of the daily demands of life -- from picking up a child to carrying armloads of groceries -- are simply easier. It's one reason many trainers today emphasize "functional fitness." "It's not just about isolating one muscle, like your biceps or abs," explains Joan Pagano, women's fitness-expert spokesperson for the IDEA Health and Fitness Association and author of Strength Training for Women. "In real life, your body acts as a whole unit, engaging multiple muscles simultaneously."

Get started! Strength training for beginners

Even with all these benefits, many women still resist strength training for one reason: fear of getting bulky. "I have no clue what to do with the weights, and I'm scared I'll end up looking like a pro wrestler," says Rachel Herod, a nurse in San Diego, California.

The reality, however, is that it's nearly physically impossible to build bulky muscles like a guy. "Women simply don't have the hormonal makeup to get as muscular as men," says Kraemer. In fact, studies show that combining resistance training with regular cardio will only help you to look leaner as you become stronger.

And if squeezing in one more activity into an already packed schedule seems impossible, take heart: Resistance training doesn't have to be a big time commitment. "The bottom line is that women should do two full-body strength workouts a week, but you can do them in as little as 20 minutes," explains Pagano.

Nancy Smith, a 33-year-old social worker from Atlanta, is sold on strength training. Before she got a weight tutorial at the new gym she joined a year and a half ago, she just ran on the treadmill in the workout room at her apartment complex. "There were weights, but I didn't know how to use them. So I ignored them," she says. "I didn't know the settings on the machines. Even with the little picture, it was still too complicated."

But at her new gym, she joined a group training class and has seen a "remarkable difference," she says. "Before, I could do an 8-pound biceps curl, and now I can do 15 pounds. Because I'm stronger, I feel more confident. For the first time I have definition in my arms. I bought a strapless dress because I wanted to show them off, and I felt fantastic. Now strength training is a priority for me."

What if your strength training comes in a less traditional form than dumbbells or machines? Devotees of disciplines like yoga and Pilates say they get all the lean muscle they need from their chosen disciplines. But experts disagree.

"You will build some muscle with yoga poses that have you supporting your body weight against gravity, but eventually you'll reach a plateau and will need to add weights or some other form of resistance," says Joan Pagano. Pilates mat classes present the same limitations, and while spring-loaded machines like the Reformer do offer a progressive resistance, they at least partially support your body weight, so you won't get the same weight-bearing benefits of many standing strength poses.

Sculpting classes can be a great introduction to resistance training for many women, says Joe Dowdell, co-owner of Peak Performance Fitness in New York City. If you do take sculpting classes, make sure you're working at the right intensity, or you'll stop seeing results, he adds.

And if you can't get to the gym, a variety of equipment, including resistance bands and medicine balls, can be a challenge. "So long as you're fully fatiguing the muscles, it doesn't matter what is providing resistance," says Pagano.

Start your plan: The Best Strength-Training Machines for Women