5 Steps to a Good Night's Sleep

Sleep your way slim and get rested: Here's how to make eight hours of sleep a dream come true (before those dark circles get any more noticeable).

From the editors of Fitness 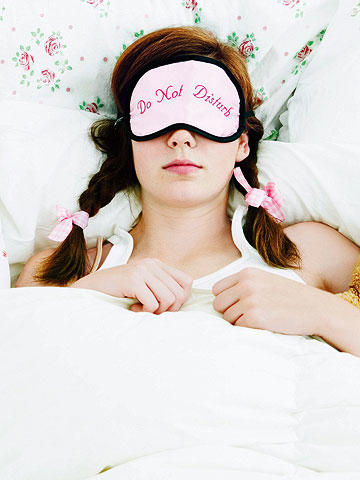 We'll keep this short because we know you're exhausted. According to a recent poll by the National Sleep Foundation, 60 percent of women say they get a good night's sleep just a few days a week or less, and nearly half admit they're so beat that it interferes with daily activities. "We live in a 24-7 society with a huge amount of pressure and commitments," says Helene A. Emsellem, MD, medical director of the Center for Sleep & Wake Disorders in Chevy Chase, Maryland, and author of Snooze...Or Lose! "It's very easy to sacrifice sleep time for other things we think are more important."

Then there are all those nights we can't nod off, no matter how hard we try. Research shows that women's sleep tends to be disrupted during menstruation, pregnancy, and perimenopause. Women are also more likely than men to suffer from insomnia (about 7 out of 10 women reported having it in a recent poll). Given all this, it's no wonder that the amount of money we spend on sleeping pills has more than doubled since 2002, according to IMS Health, a healthcare information company. And it helps explain why more than a third of women chug at least three caffeinated beverages daily.

If you don't want your best rest to happen during an important meeting at work or at your desk at 3 p.m., here's how to take back your night.

Hit the sheets: We know, we know — the dog needs a bath, you've got 124 e-mails to answer, and you have to do two loads of laundry before you can call it a day. But here's the thing: The chores can wait. "Adequate sleep is as essential to a woman's health as eating and exercise. Stop feeling guilty about getting it," says Lawrence Epstein, MD, author of The Harvard Medical School Guide to a Good Night's Sleep.

Is that really possible? Yes, if you prioritize what has to get done right now, and what can wait. Try this simple exercise: "About an hour before bed, type up a to-do list of all the things you need to accomplish, print out the list, then ball it up and throw it in a wastebasket," says Patricia Smith, coauthor of Sleep Disorders for Dummies. "The physical act symbolizes that you don't have to worry about these things until morning — they'll all be there safely on your computer and you can deal with them then."

Do z math: "Most adults require seven to nine hours of sleep a night," says Dr. Emsellem. Since constant catch-up can make it hard to determine exactly how much your body needs, figure it out on your next vacation, when you're miles away from your alarm clock and jam-packed schedule. "You should reach a point where you're going to bed at the same time, rising at the same time, and feeling rested," says Clete Kushida, MD, PhD, director of the Center for Human Sleep Research at Stanford University. "That's your optimal sleep length." Once back home, make it a goal to stick to that amount, since skimping even a little can have a huge effect on your mood and concentration: "Studies have shown that if you cut back by about an hour just for one night, your alertness decreases by up to one-third," says Dr. Kushida.

Zap your rest robbers: Okay, you're ready to get your eight hours, but something else is keeping you up. In a word: pain. Backache. Headache. Cramps. "Pain is the number-one reason why people can't sleep," says Smith. If over-the-counter meds don't help, see your doctor. It sounds like a no-brainer, but, experts say, you'd be surprised how many people try to tough it out.

Other common sleep stoppers are easier to fix. For one thing, kick your kids, pets, computers, and any work-related reading out of bed. "Americans turn their bedrooms into Grand Central Station," says Smith. "Clear out the clutter." If your partner's snoring is the problem, turn on some white noise, such as a fan, to help drown out the racket. You should also send him to a sleep doctor. Loud snoring and twitching can be symptoms of serious disorders, including sleep apnea.

The Truth About Women and Pain

Don't skimp on sleep in order to fit in exercise: "People often think the choices are between two things that are healthy — sleep in or get up early to exercise," says Dr. Epstein. "You need the exercise and you need the sleep, but you probably don't need those back-to-back Entourage reruns." Or all that time spent surfing the Internet. See, we just bought you an extra two hours!

Sleep secret: Wear socks to bed. According to a Swedish study, warming your feet helps your body relax, which can promote zzzs.

Think like a kid: Yep, even adults need a routine. Here's yours (no binkie required):

Why You Need More Sleep Tonight

IT MAKES YOU...HEALTHY
Skimping on shut-eye has the potential to be deadly: "Chronic sleep debt raises your risk for high blood pressure, heart disease, diabetes, and obesity," says Dr. Emsellem. Your immune system is compromised too, "so you're more susceptible to catching every virus that comes along."

IT MAKES YOU...SMARTER
Though your body shuts down, your brain buzzes with activity as you sleep. That's when it sorts, processes, consolidates, and stores the masses of information you absorbed during the day. "Sleep is crucial for learning, cognition, memory, and performance," says Dr. Epstein. In fact, a Harvard study showed that adults who got a good night's sleep performed 44 percent better on a memory test 12 hours later, compared with those who stayed awake.

IT MAKES YOU...SLIM
Recent research reveals "a very close relationship between insufficient sleep and the inability to lose or stabilize weight," says Dr. Emsellem. A likely reason: Sleep debt interferes with the function of hormones that regulate how efficiently the body burns fat.

IT MAKES YOU...COORDINATED
Harvard scientists have found that after trying a new motor task — playing a piano minuet, doing an aerobics routine — a good night's rest solidifies what you've learned, making it easier and more automatic the next day. "Studies show that your brain replays the same sequences during the night," explains Dr. Emsellem. "The next day, you just know the moves — it's no longer a conscious act."

For the more than 44 million Americans who take a prescription to drift off, they seem like miracle drugs. But the FDA recently added warning labels to 13 prescription sleep medications, including top sellers Ambien and Lunesta, after reports that the drugs cause some people to binge eat, sleepwalk, or even sleep drive. Investigators aren't sure how common these wacky-but-dangerous side effects are, or whom they're most likely to affect, but they are rare, says Dr. Epstein, who notes that the odds increase if you mix sleep drugs with alcohol. The risk of dependency also rises when the drugs aren't taken as directed (if you rely on them nightly, for example, instead of just occasionally).

"When used as prescribed, these medications are very safe, and can be very helpful for people who need to get through a particularly rough time," sums up Dr. Epstein. But if you have trouble sleeping without pills, or you wake up next to a suspiciously empty bag of Tostitos, quit the drug immediately and call your doctor.

3 Secrets for Getting More Sleep