Save yourself from torturous way-below-zero temps. 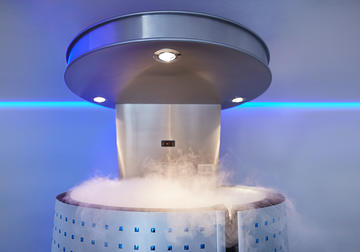 Stars like Derek Hough, Mandy Moore, and Chris and Heidi Powell are gaga over cryotherapy...or at least it seems like they are, according to Instagram. Each of them has stepped into the trendy chambers that blast bods with vapors at temps that go way below zero—sometimes as low as minus 300 degrees—all in the name of faster muscle recovery.

But that's not all: Fans of cryotherapy claim the freezing-cold air will tighten the skin, help them shed serious calories (some claim blasting up to 800 during a single session), and can even make people feel more cheerful afterward. It's also been said cryotherapy can lessen the pain associated with rheumatoid arthritis and help athletes recover after a grueling workout. Oh, and all it takes is three minutes to tap into all of those benefits.

Sounds too good to be true, right?

Unfortunately, it is. The U.S. Food and Drug Administration released a consumer update today calling BS on the trendy service, and the FDA reports it hasn't approved any of these cryotherapy devices even though plenty of treatment centers out there look and sound legit. Doctors associated with the FDA reviewed current studies and research on cryotherapy, and they didn't find any proof that it lives up to the many health claims. Bummer.

What's worse: Even though the valid benefits may be lacking, the risks aren't. The FDA warns cryotherapy involving liquid nitrogen lowers the oxygen in the air, which could leave people feeling light-headed or cause a loss of consciousness. Frostbite, as you may have guessed, is also a risk, and one woman died in a chamber in 2015.

Bottom line: Until there's more solid proof that the trend is worthy of your time, stick to warmer air and proven methods of muscle recovery. Your health and safety isn't worth the risk.