A Pain You Can't Ignore: The Signs, Symptoms, and Treatment of Endometriosis | Fitness Magazine
Skip to main content

A Pain You Can't Ignore: Endometriosis

Stomachaches, nausea, cramps. What you think is just part of being female could actually be a dangerous, debilitating disease. Here's what you need to know about endometriosis — and why exercise could be the best antidote of all.
By Kristina Grish 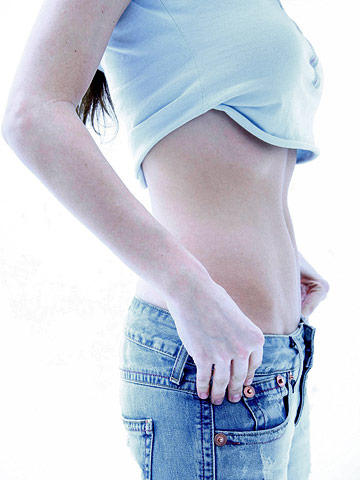 Last January, after a long run, I sat down to a delicious dinner of Thai takeout — then sprinted to the bathroom three hours later. Diarrhea turned to blood, and when I thought I was well enough to stand, I actually passed out. My husband, Scott, found me a few feet from the toilet with my pants around my ankles. He was scared; I was mortified. We'd been married only six months, and this was hardly newlywed bliss.

I blamed dodgy tofu, or maybe a bad mango salad. My symptoms persisted through the night, so I called a gastroenterologist the next morning. He saw me right away and scheduled a colonoscopy. The verdict? Inflammation and impaired blood flow to the large intestine, a problem most common in men and women over the age of 60. I'm 33.

The stomach pain, nausea, and diarrhea continued for several weeks, coupled with sharp cramps and deep pain during sex. My GI doctor prescribed a common antispasm medication to calm my intestinal issues. I saw a food allergist to manage my diet and bloating, and an acupuncturist to help with the cramps. I still exercised, though not as often. I found that high-intensity Spinning, when I felt up to it, muted the pain.

After months of turmoil, my gyno performed laparoscopic surgery; this revealed that I have endometriosis, a chronic disease in which the uterus's endometrial lining begins to grow elsewhere, such as on other pelvic organs, interfering with their function and potentially damaging the bladder, intestines, and appendix. Surgery, the only sure way to confirm and correct the condition, showed that the sticky endometrial lining was binding my left ovary to my intestines and uterus, putting pressure on the organs and likely causing the intestinal problems. It had also grown on both ovaries and the area behind my uterus, which contributed to my stomach pain.

Listen to Your Gut

Endometriosis is a problem that more than 80 million women across the world suffer from — with at least 10 million cases in the United States alone, according to the Endometriosis Research Center. It's one of the top three causes of infertility, is the source of an estimated 80 percent of chronic pelvic pain, and accounts for more than half of the 600,000 hysterectomies performed annually. A 2007 study calculated that costs of endometriosis care in the U.S. reached $22 billion in one year alone.

Yet because few women share details about something so personal, it's easy to feel, as I did, confused about what's happening. Here's what I learned: During a normal period, the uterus sheds its endometrial lining, and small amounts of endometrial cells pass harmlessly through the pelvic area and exit the body. But in an endometriosis patient, when these cells are shed they invade other areas of the body. They frequently implant themselves on the uterus, ovaries, fallopian tubes, bladder, appendix, and rectum, where they cause inflammation and painful scarring, and can lead to filmy adhesions that bind together organs, muscles, and ligaments. (This is different from uterine fibroids, which are benign growths on or inside the uterine walls.) In severe cases, multiple organs can become plastered together. No one knows the precise cause of the condition, though some research points to genetic links. Estrogen is known to stimulate the growth of endometrial tissue.

Because endometriosis pain most often occurs during ovulation, menstruation, urination, bowel movements, and sex, it's frequently dismissed or mistaken as a symptom of another health condition, which can lead to months or even years of misdiagnosis. This is especially true for younger women. "Studies indicate that up to 70 percent of teenagers with painful periods already have endometriosis," says Bruce Lessey, MD, PhD, a leading researcher of the condition and medical director of reproductive endocrinology and infertility at Greenville Hospital System University Medical Center in South Carolina. Doctors regularly prescribe birth control pills as the first line of defense against period pain, since moderating estrogen and progesterone levels has been shown to ease menstrual cramps. Lowering estrogen levels also eases endometriosis symptoms, however, so going on the pill may disguise the condition until a woman wants to start a family and discovers she can't conceive.

A diagnostic laparoscopy — which is what I had — is currently the only way to confirm that a woman has endometriosis and begin to treat it. During the procedure, if endometriosis is found, surgeons remove as many lesions as possible. Even so, up to 60 percent of women can experience a recurrence within the first year, according to the Endometriosis Research Center. Another, more involved procedure is called advanced laparoscopic excision, where the surgeon attempts to remove the "roots" of the endometrial growth. Although the procedure has a higher success rate, it is not widely available.

Twelve years ago Mary Frances Mango, 35, a nurse in Smithtown, New York, was diagnosed with endometriosis. She underwent three laparoscopies plus several hormone treatments, but the endometriosis kept returning. "I had severe cramps, bladder pain, and painful intercourse that caused me to bleed," she says. "The surgeries provided temporary relief, but the pain would quickly come back." In March 2009 a friend suggested that she see Tamer Seckin, MD, an endometriosis specialist in New York City who uses advanced laparoscopic excision to treat the disease. After the surgery, he put her on a mild birth control pill to moderate estrogen levels and lower the chance of future growth. So far, she's pain-free.

Because of the likelihood of recurrence, many women look for additional methods to ease their pain. The good news is that regular exercise and reducing your BMI naturally lower the body's estrogen levels, which helps alleviate some of the worst symptoms and in some cases may even prevent the disease in the first place. "Women who are very fit may find protection from endometriosis," Dr. Lessey says. In a groundbreaking study of women ages 18 to 39, the Fred Hutchinson Cancer Research Center in Seattle found that high-intensity workouts, such as running, biking, and playing tennis, three or more times a week slashed endometriosis risk by 76 percent. Women who exercised more than seven hours a week, especially if they started before age 26, decreased their risk of developing endometriosis by 80 percent. "In your teens and early 20s, regular menstrual patterns are forming. This is a critical window during which physical activity may help moderate estrogen production," says Stacey Missmer, a top endometriosis researcher and assistant professor of obstetrics and gynecology at Harvard Medical School.

If you already have endometriosis, medium- to high-intensity exercise, such as running and cycling, may help lessen the symptoms. Research shows that regular physical activity helps reduce estrogen levels and moderates the production of prostaglandin hormones, the body's pain receptors, which are released during your cycle. Yoga and Pilates moves also gently stretch the pelvic tissues and muscles that can be literally bound together by endometriosis, says Beth Heller, owner of Pulling Down the Moon holistic fertility centers in Chicago, who provides integrative care for endometriosis patients, including acupuncture, exercise, and diet. "Working out is imperative to treating the symptoms," Heller says, noting that yoga also helps reduce stress, which can aggravate inflammation in the body.

And then there's the feel-good effect that comes from a satisfying workout. "The immediate relief is from endorphins and serotonin, but the sustained effect is the estrogen dip," says Thom Lobe, MD, founder of Beneveda Medical Group in Beverly Hills, which specializes in pain management.

Beyond regular physical activity, endometriosis treatment depends on how aggressive the condition is. Doctors often suggest ibuprofen and other nonsteroidal anti-inflammatory medications like Naproxen for women with mild cramps. Also, "hormones that suppress ovarian function are highly effective" for severe cases, says Beth Rackow, MD, an assistant professor of obstetrics and gynecology at Yale University School of Medicine. Extended-cycle or continuous hormonal birth control options can reduce the number of periods and are often prescribed. Other doctors recommend aromatase inhibitors, generally used to treat breast and ovarian cancer. "These drugs suppress aromatase, an enzyme your body produces that promotes more potent estrogens, which contributes to endometriosis," explains Ken Sinervo, MD, a surgeon at the Center for Endometriosis Care in Atlanta and an expert in the field of advanced laparoscopic excision. "Limiting aromatase production in the body with drugs like Letrozole temporarily suppresses endometrial growth," he adds. Natural progesterone creams and the Mirena IUD are often prescribed, as are drugs like Lupron, which send the body into a menopause-like state for six-month periods.

In the do-it-yourself realm, dietary adjustments may make a big difference. Resveratrol in wine may reduce the growth of endometriosis, according to a 2009 American College of Obstetricians and Gynecologists study. Omega-3 fatty acids have anti-inflammatory properties, so eating salmon and other fatty fish that contain them is key. Researchers believe the lycopene in tomatoes may stop the production of proteins that contribute to endometrial adhesions, and some studies suggest that flavones in celery and parsley can inhibit aromatase. Vegetables like broccoli, cabbage, and bok choy contain compounds called indoles, which might improve the body's ability to moderate estrogen levels, and flaxseeds are high in lignans and fiber, which studies show may also ease estrogen-related conditions. What to avoid? Red meat: Women who ate it at least daily had twice the risk for endometriosis as those who ate three or fewer servings per week, according to research done at the University of Milan. Some experts attribute the link to the high levels of PCBs that can accumulate in animal fat via contaminated feed, which in turn may trigger symptoms by altering hormone functions and the immune system.

This is the place I now find myself, after finally being diagnosed and treated. Scott and I are trying for a baby, with the bonus that pregnancy may suppress my endometriosis symptoms. In the meantime, I continue to exercise, see an acupuncturist, and follow an anti-inflammation diet to manage my condition. I'm also eating plenty of Thai food again — bring on the salmon and bok choy!

The Top 10 Symptoms of Endometriosis

If you have one or more of these symptoms, talk with your ob-gyn about the possibility of endometriosis.

For more information, go to endometriosis.org