The Truth About Using Arnica to Relieve Muscle Pain

Arnica has been widely touted in the holistic health world for its healing properties. We found out if it's worth trying. 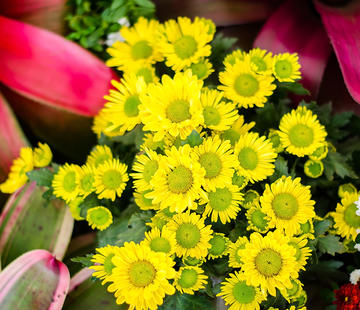 If you've ever walked up and down the pain relief section of any drugstore, you've likely seen tubes of arnica alongside wound dressings, ACE bandages, and bacitracin. But unlike the other straight-up medical products, arnica has not been approved by the FDA. In fact, a quick scan of the FDA site tells you that they classify arnica as an "unapproved homeopathic OTC human drug." Still, a lot of people swear by arnica for relief from both muscle and joint pain. Here's what you need to know.

Arnica montana is a compound found in—wait for it—mountain daisies.

Usually found in gel or cream form today (though there are supplements as well), arnica has been used for medicinal purposes for centuries, according to Dr. Suzanne Fuchs, a doctor of podiatric medicine and surgery in New York City. Also known as the mountain daisy, "arnica is a favorite herb amongst homeopathic doctors for the treatment of swelling caused by sports injuries," says Dr. Lynn Anderson, a naturopathic doctor.

According to Anderson, the reason arnica works is that it, like many plants, has antiseptic and anti-inflammatory properties. When arnica is applied, it stimulates circulation, helping the body's own healing system react—which encourages healing. So it assists the body in reducing swelling and relieving pain.

Fuchs has her patients use arnica gel or cream after surgery, as well as and for areas of inflammation in their feet and ankles. They also use it on ligaments and tendons for things such as plantar fasciitis, foot and ankle sprains and Achilles tendonitis. "Arnica helps heal and decrease inflammation. It also relieves pain and soreness, and helps decrease bruising."

Likewise, licensed Chinese medicine practitioner and acupuncturist Timur Lokshin recommends arnica for acute inflammation. He believes you need to follow a specific application method (known in the massage world as centripetal effleurage, which is a stroking motion toward the center of the injury/source of pain) for it to actually be effective.

A few studies back it up, too.

Dr. Jen Wolfe, a doctor of pharmacology, says that because arnica is a generic substance, "there isn't a drug company with an interest in it enough to finance a prospective double-blind, placebo-controlled study—the industry standard—in evaluating its efficacy." However, there is some research to show that it does work.

Take, for example, a 2016 study published in Plastic and Reconstructive Surgery, finding that topical application of arnica following rhinoplasties (read: nose jobs) was effective in reducing both swelling and bruising. However, this type of study only demonstrates a correlation, not causation. A similar Annals of Plastic Surgery study found that ingesting arnica tablets (a less common form of arnica) sped up rhinoplasty recovery time when compared to the recovery time of patients taking placebo pills. However, there were just 24 subjects—hardly representative of the entire population.

Other experts say it's total BS.

Dr. Brett Kotlus, a plastic surgeon from Long Island, says that arnica is not effective, really, at anything. "I performed a clinical study using the most popular homeopathic arnica before and after upper eyelid surgery (blepharoplasty) using a double-blind placebo-controlled design, and there was no benefit in comfort or bruising." Kotlus says that while naturopathic doctors and chiropractors are very strong advocates of homeopathy, they only cite anecdotal evidence because there are no good studies showing arnica works. Similarly, Dr. Stuart Spitalnic, an emergency physician in Rhode Island, chalks up any benefit to the placebo effect, and he doesn't recommend arnica or use it with any of his patients.

Perhaps Wolfe sums it up best: "Pain is such a subjective measure. On a pain scale of 1 to 10 (with 10 being the worse pain someone has ever experienced), one person's 4 might be another person's 8." In other words, while there may be limited evidence that it does work, the benefits are subjective. There's no harm in applying topically (hey, even a placebo effect can be a good thing), but you should probably avoid popping supplements since it's not FDA approved.