Keep Your Hips and Knees Happy

If your joints hurt, get in line -- millions of women deal with the pain. But you can stay physically strong, avoid injuries, and even prevent damage with a few simple exercises and our DIY guide. 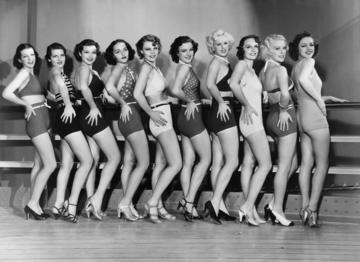 My friend Ashley mentioned a weird thing that happened at the gym. "This guy I've been working out with told me that my foot's turning out a little while I'm exercising and I should work on strengthening this muscle," she said, as she ran her hand from the inside of her upper thigh down to her kneecap. "He said that I'm compensating for the weakness, which I guess is bad for my knee."

A little alarm went off in my head. "That is bad!" I said. "I bet it's throwing off your alignment and eventually, if you don't do something about it, you're probably going to end up in a lot of pain."

Not that I'm an expert or anything, but for the past several months I've spent hours talking to doctors and physical therapists about why women's hips and knees hurt so much. Ashley, who's in her 20s, isn't too worried about her joints -- not yet, anyway. Maybe you aren't either. But that's the thing. These problems can creep up on you.

Hip and knee pain is incredibly common: More than 10 million women have to deal with it and almost everyone's at risk. Whether you're a super-fit workout fiend or totally exercise-phobic, your lifestyle could be contributing to joint problems that can lead to osteoarthritis -- even surgery. In fact, hip replacements in women have increased by nearly 40 percent in the past 15 years, and knee replacements have more than doubled. While these procedures are still most common in older people, incidence among women 45 to 64 is growing.

Many women's knee problems start because of repetitive stress injuries from a high-impact activity like running. That's what happened to Barbara Goldrich, 43, of New York City, who trained regularly for marathons. She actually first noticed her knee pain while taking a Zumba class. "I pivoted and felt something go 'zing,'" she says. Over the next few months, that little pain escalated. "I would get up from my desk at work and be hobbling," she says.

When she finally saw her doctor, he told her that her kneecaps were out of alignment; there was probably also some wear and tear from running. The cause? Despite all the miles she logged, certain muscles surrounding the joint didn't have the strength to support her knee properly. So he prescribed physical therapy to strengthen her thighs and increase her flexibility.

While overdoing certain types of exercise can lead to joint trouble, being overweight and inactive may be even more risky for your hips and knees. Excess body fat not only puts stress on joints but it also contains chemicals that can cause cartilage to break down, says Stephen P. Messier, PhD, professor and director of the J.B. Snow Biomechanics Laboratory at Wake Forest University. Sitting all day long weakens core muscles important for stability, makes you less flexible, and affects how you move, causing pain in your hips and knees -- and sometimes in both.

"People think, 'I'm getting older, so of course my joints are wearing out and I have pain.' But that's a mistake," says Ann Duffy, an advanced hip clinician with New York City's Hospital for Special Surgery. "Pain means there's something wrong."

Ironically, Dawn Elvinger's hip started hurting when she decided it was time to get more active. The 53-year-old from Blacksburg, Virginia, started training for an upcoming triathlon, figuring such an ambitious goal would keep her motivated and help her lose some weight. But she started to feel a burning sensation in her left hip when she ran. Soon it hurt to walk.

A physical therapist diagnosed her problem: her left iliotibial (IT) band was tight. The IT band is a group of muscle fibers that runs down the outside of each leg, from your hip to your knee. Elvinger's tightness caused inflammation when she increased the intensity of her workouts and over time her pelvis was knocked out of alignment. To put her pelvis back in place and stop the ache in her hip, Elvinger had to stretch, but she also had to strengthen.

"Strong, limber muscles are the key to pain-free hips and knees," says William Levine, MD, director of sports medicine at Columbia University Medical Center and member of the LHJ Medical Advisory Board. Muscles stabilize your joints, keep everything in proper alignment, and can help maintain cartilage and prevent injuries, osteoarthritis, and the need for joint replacements.

Following the right exercise plan can help prevent the problems that lead to inflammation before cartilage starts to deteriorate, says Grant Cooper, MD, cofounder of the Princeton Spine and Joint Center and author of The Arthritis Handbook. It's not just important to strengthen the area around your joints but also to strengthen everything equally, from your core to your hips to your ankles. "You want to be a multitasker," says Dr. Levine. "Part of the reason we're seeing worn-out joints at earlier ages is because women who are active aren't mixing up and spreading out their workouts."

Goldrich and Elvinger have both learned that lesson. Now that they've been adding variety with stretching and strengthening programs, they're getting back to the activities they love and -- best of all -- they're nearly pain-free.

If you're still in serious pain after seeing your doctor and a physical therapist and after trying exercises, anti-inflammatory medications, and injections, it may be time to think about surgery. While prevention is everyone's first choice, once you reach a certain point, a joint replacement may be your only option, says Mary I. O'Connor, MD, chair of the department of orthopedic surgery at the Mayo Clinic in Jacksonville, Florida. The problem? It's not always clear when bad is bad enough. Plus surgery always has risks. Before you decide:

Don't be shy about getting advice from two or three doctors. Rate your pain. Is it bad enough to outweigh the risks? Can you put off surgery for another year or two, or will that make your recovery harder? The typical knee or hip replacement lasts up to 20 years, so if you're under 55 ask your doctor what will happen if you need surgery yet again.

Your new joint isn't going to be the same as the natural one you had when you were a teenager. You will need time to recover and even after you heal you may still hurt from time to time. Women especially are at a greater risk for continued pain after a replacement, Dr. O'Connor says.

You've probably heard the scary news about the recall of some all-metal hip implants. Besides failing years before they're supposed to, the wear of metal parts rubbing against one another may cause serious damage to tissues surrounding the hip. Best advice? Ask the doctor about the make, model, and manufacturer of the implant you will be getting and do your own research. Ask how many similar procedures the surgeon has under his belt and how many replacements the hospital does each year. To learn more about exactly what happens during surgery, read about the pros and cons of different methods at orthoinfo.aaos.org.

What is it? Osteoarthritis is a degenerative disease that happens when the cartilage in your joints breaks down, which leads to joint inflammation and stiffness -- even disability. It's the most common type of arthritis, often caused by injuries, overuse, and regular old wear and tear.

Who gets it? Nearly 19 percent of women 45 and over have osteoarthritis of the knee and around 4 percent of women over 55 have it in their hips. It takes years to develop, but you can slow it down and treat the symptoms, says Dr. O'Connor.

How do you fix it? Losing weight, staying active, and strengthening the muscles around the arthritic joint can help you feel better and keep the disease from progressing. And, most important, those same things, if started early, can prevent arthritis from occurring in the first place.