You're overbooked and overworked. Between your job, your family, your fitness routine and all the to-dos on your list, it's no wonder you're tired sometimes (or, um, all the time). But if you feel as if you're running on empty most days and find that getting more sleep hasn't helped, you may have an underlying health problem, says Molly Cooke, MD, the president of the American College of Physicians. Here, six surprising conditions that can leave you drained. 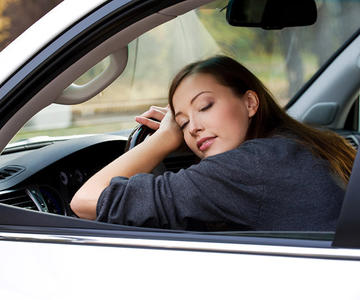 Up to 40 percent of us are deficient in D, the vitamin that protects against osteoporosis and several autoimmune diseases and may also help fight cancer and high blood pressure. "You have vitamin D receptors in your muscles and in almost every organ of your body, including your heart and brain," explains Sue Penckofer, PhD, a professor at the School of Nursing at Loyola University in Chicago. If you're low in it, you may have no energy. Another sign of a deficiency: a dull pain in your bones or muscles that persists even when you're not working out, says Michal Melamed, MD, an associate professor of medicine at Albert Einstein College of Medicine in New York City.

The Rx: Ask your primary care doc to run the 25-hydroxy vitamin D blood test to measure your level of D, which should be between 20 and 40 nanograms per milliliter. If yours is less than that, your physician may suggest supplements that contain more than the 600 to 800 international units found in most multivitamins. Patients treated with vitamin D reported less muscle weakness and fatigue, according to a study presented at the Society of Endocrinology's annual meeting last year.

You're stuffed up all the time.

Chronic sinusitis affects about 12 percent of adults — or almost 30 million people — according to the Centers for Disease Control and Prevention. "Your sinuses become inflamed and swollen over a period of weeks, which causes mucus to build up," explains Scott Stringer, MD, the chairman of the Department of Otolaryngology at the University of Mississippi Medical Center in Jackson. Symptoms include fatigue; congestion; pain and tenderness around the eyes, cheeks and nose; a reduced sense of smell and taste; and bad breath. Fighting sinusitis leaves you too exhausted to do much of anything else.

The Rx: A saline nose spray or a neti pot can help flush out your sinuses. If symptoms persist, your primary care doc can prescribe a steroid nasal spray to shrink nose and sinus membranes. If that doesn't help, go to an ear, nose, and throat specialist, Dr. Stringer suggests. She will look up your nose with a thin tubular device called an endoscope to see what's going on and then prescribe a treatment: antibiotics for an infection, antihistamines or a nasal steroid for an allergy-related condition, or oral steroids for nasal polyps (tissue growths in the nose), which are common among adults.

More than 2 million people in the United States have celiac disease, and about 70 percent are women, according to the National Foundation for Celiac Awareness. If you're among them, eating anything with gluten — which is found in wheat, rye and barley, triggers an immune response in your small intestine, producing inflammation that prevents the absorption of nutrients and leaves you malnourished and with an upset stomach. As a result, you don't have the fuel to get through the day, says Peter Green, MD, the director of the Celiac Disease Center at Columbia University Medical Center in New York City. Sensitivity to gluten, which affects another 18 million people, can also trigger fatigue. Diarrhea and weight loss are the classic signs of gluten problems, but most sufferers have symptoms that are more subtle, says Alessio Fasano, MD, the director of the Center for Celiac Research at MassGeneral Hospital for Children in Boston. "They include fatigue, bloating, body aches, chronic headaches, and short-term memory loss."

The Rx: Your GP can order a blood test to look for elevated levels of antibodies that indicate celiac disease. If the result is positive, you'll need to consult a GI specialist to check for damage to the lining of your small intestine, Dr. Green says. Steroids may help relieve symptoms, but they can have significant side effects. To treat celiac, follow a gluten-free diet: Eat fresh fruits and vegetables, lean meats, fish, beans, and nuts as well as naturally gluten-free grains like quinoa and rice. If your blood test is negative but you suspect you have gluten sensitivity, avoid foods containing the substance for a month to see if you notice a difference, Dr. Fasano advises.

You're down in the dumps.

Feeling uninspired to do much of anything? You may be depressed. That's especially true if you are easily irritated, can't concentrate, and have lost your desire to have sex. Depression and fatigue are so closely linked, it's hard to know which one triggers the other. "The same chemical imbalances responsible for depression — low levels of serotonin, norepinephrine, and dopamine in the brain — most likely affect our energy level as well," says Sudeepta Varma, MD, a psychiatrist at New York University Langone Medical Center in New York City.

The Rx: Do 30 minutes of cardio five days a week and regular meditation or yoga, Dr. Varma advises. Research suggests that they have a mood-boosting effect. If that doesn't help, find a psychotherapist who specializes in cognitive behavioral therapy; studies have shown that it works at least as well as antidepressants in people with moderate depression.

You have heart troubles.

If you normally run a mile effortlessly but now struggle to complete one lap around the track and/or you're experiencing trouble sleeping, shortness of breath, indigestion, or anxiety, you may have a hidden heart condition. Seventy percent of women who have had heart attacks said they were unusually tired a month beforehand, according to a study from the University of Arkansas in Fayetteville. Even early-stage heart disease can cause fatigue. "Blockages in your arteries make it harder for blood to flow through your body, which wears you out," explains Nieca Goldberg, MD, a spokeswoman for the American Heart Association.

The Rx: If symptoms last more than a few days, see your doctor for total blood pressure and cholesterol level tests, particularly if you feel worse rather than reinvigorated after working out. Regular exercise along with a healthy diet can help you control elevated levels. If that doesn't do the trick, your MD will prescribe meds.

Your immune system is in overdrive.

Fatigue that's so overwhelming you can't shake it — along with achiness and joint pain that persist for hours every day — are possible signs you may be suffering from an autoimmune disease, a condition in which your immune system mistakenly attacks your body's tissues, says Chaim Putterman, MD, the chief of rheumatology at Albert Einstein College of Medicine and Montefiore Medical Center. Seventy-five percent of these diseases occur in women; lupus and rheumatoid arthritis are the most common ones affecting bones and joints among those in their twenties and thirties, Dr. Putterman says.

The Rx: If aches and pains last more than a week or wax and wane for several months, see your doctor for an evaluation. He will look for inflammation in your blood, an indication that you may have an auto-immune disease. Lupus is usually treated with over-the-counter nonsteroidal anti-inflammatory drugs, such as naproxen or aspirin, or steroids. Patients with rheumatoid arthritis are given drugs like methotrexate, etanercept, and abatacept, which relieve symptoms or may slow the progression of the disease.

Pills That Steal Your Energy

Still can't figure out why you're tired? The culprit could be one of these common offenders in your medicine cabinet.

Proton pump inhibitors: Prescribed for gastroesophageal reflux disease (GERD), these drugs can lower your magnesium level, causing fatigue. Another option: an H2 blocker such as ranitidine, which doesn't have this effect.

Antihistamines: These relieve allergy symptoms but can be sedating. Look for "nondrowsy formula" on the package, or take at bedtime.

Blood pressure meds: Some, like beta blockers, slow your heart's pumping and can make you tired. Ask your doctor about calcium channel blockers, which work by relaxing the muscles of your blood vessels, instead.

Statins: Cholesterol drugs can sap your energy and have been linked to muscle fatigue. Your physician can tweak your dosage to minimize these problems. Also, taking coenzyme Q10 supplements may help.

Antianxiety meds: Xanax, Valium, and Ativan can leave you feeling drained. Consult your doctor about alternative ways to manage stress, such as cognitive behavioral therapy, yoga, or other exercise.

Antidepressants: Certain types of these drugs, including Cymbalta, Effexor, Paxil, and Zoloft, affect histamine, the neurotransmitter that's responsible for wakefulness. Try taking them at night or talk to your MD about switching to a drug, such as Wellbutrin, that doesn't cause sleepiness.