Is Meat Bad for You and Unhealthy? | Fitness Magazine
Skip to main content

Why you should take the latest study about meat with a grain of salt. 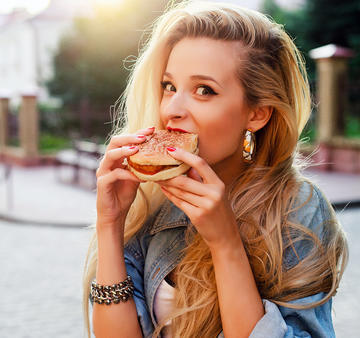 Vegetarians live more than three years longer than meat eaters, according to a new study published in the Journal of the American Osteopathic Association. At first glance this can sound pretty scary. Who wants to throw away three healthy years of life? But before you call your steak a mistake and swear off bacon forever, there are some things you should know.

First, some background. Researchers at the Mayo Clinic undertook the study as a way to answer the question they hear a lot from doctors: What should we tell our patients to eat to be healthy? Specifically, the researchers were looking at whether eating meat is healthy and if so, how much meat to eat would be best. It seems like a simple question but, as anyone who has delved into the literature on diet and nutrition knows, the answer can be incredibly complicated. And the answer they came up with was a lot more nuanced than "meat will kill you." Let's dig deeper.

It was an analysis of older research.

This was a meta-analysis of existing research. A meta-analysis takes data and results from older studies and analyzes them together, looking for trends. While this can be a powerful tool, meta-analysis has some serious drawbacks. For starters, you can't control what previous scientists did. If there were faults in previous studies, then that data will still be questionable. Plus, not all the studies used looked at exactly the same variables under the same conditions. For example, some studies looked at Europeans while others looked at Americans, two populations that can have very different eating philosophies, cooking techniques, and sources of meat. It doesn't mean the info is junk. It just means that you need to be aware that it's actually six studies—and none of them flat-out said all meat is bad.

Not all meat is created equal.

The meta-analysis concluded that the strongest correlation was between eating red meat and a higher risk of death from any cause. But there is a big difference in types of animal proteins and even between types of red meat. For instance, decades of research have shown a link between processed meats (like lunch meat, salami, hot dogs, and bacon) and an increase in some types of cancer and heart disease. However, the problem appears to lie in the way they're processed with added nitrates and preservatives, rather than in the meats themselves.

Another factor is how the meat was farmed. Recent research has found significant differences in the nutrition provided by grass-fed and pastured beef versus conventionally farmed (grain-fed) animals, for instance. In addition, wild fish have been found to have more good fatty acids than farmed fish. And chicken fed their natural (not vegetarian) diet have a better nutritional profile than factory-farmed cluckers.

"There’s a substantial difference between wholesome, fresh, unprocessed foods and their industrialized, adulterated counterparts—and meat is no exception,” says Mike Fenster, M.D., an interventional cardiologist, chef, and author of The Fallacy of the Calorie: Why the Modern Western Diet is Killing Us and How to Stop It. “There is strong research-based evidence for an association between the consumption of processed red meats and an increased risk of diabetes, cardiovascular disease, cancer, and early mortality. Importantly, the same studies [that the meta-analysis was based on] didn't show any correlation between fresh red meat and such disabilities and diseases at any level of consumption."

Then there's the issue of cooking: Previous research has found that grilling, charring, and smoking meats can increase carcinogens while decreasing nutrition. Yet this meta-analysis couldn't tease apart the differences from processing, farming, and cooking practices. And since Americans mostly eat processed and conventionally farmed meats, it seems likely that the data would skew to show that.

Summary: There's a huge difference between eating a small grass-fed and pastured steak and chowing six grilled hot dogs at a barbecue.

The headlines may not reflect the truth of the research.

Click-bait headlines sell—not to mention, it can be hard to accurately distill complicated findings into a six-word sound-bite. So while many places are reporting this study as saying that eating meat will kill you, that's not actually what the researchers said. Their conclusion? "Physicians should advise patients to limit animal products when possible and consume more plants than meat."

In the end, telling people to limit animal products and eat more plants is a lot less shocking than saying meat will kill you. “The prescription for success is simple,” says Dr. Fenster. “Choose the wholesome, real and authentic foods that nature has offered us with as little man-made manipulation as possible."