The Messed Up Reason Hope Solo Is Getting Boo'ed In Rio 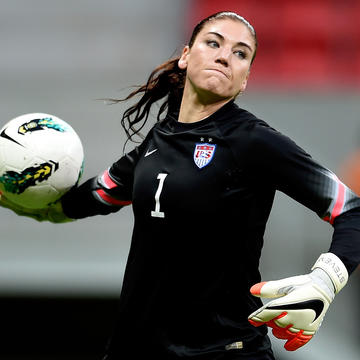 The Olympics haven't even officially kicked off yet and already reports are coming in about problems plaguing the Games—the threat of Zika at the top of that list. (One Australian Condom Company Is Sending "Anti-Zika" Condoms to the Olympic Village.) But apparently, some people in Rio are not too pleased when athletes want to voice their health concerns about the mosquito-spread virus.

One of those outspoken athletes is the star goalkeeper for the U.S. Women's Soccer team, Hope Solo. Like many athletes, she isn't happy about the health risks posed by this year's Games (some athletes have even opted to skip the Games entirely), and she hasn't been shy about sharing her frustration about the dilemma of having to choose between protecting her career or protecting her health in order to pursue her Olympic dreams.

Even though she ultimately decided to show up in Rio to compete for Team U.S.A., the athlete isn't kidding around when it comes to protecting herself against Zika threats.

If anyone in the village forgets to pack repellent, come and see me...#DeptOfDefense #zikaproof

But all that talk has caused Solo to be the target of some pretty alarming backlash. During a match against New Zealand (some competitions are already underway in Rio prior to the official opening ceremony tonight.), Solo was met with some major hostility from the Brazilian crowd. Fans continually heckled her throughout the competition, even going so far as to chant "Zika" every time she touched the ball.

Despite the hostility from her host country, Solo isn't letting the haters get to her. The U.S. Women's team won the match against New Zealand 2-0, and if she's even half as prepared as she is to fight off big bites in Rio, we bet she can handle some poor sportsmanship like it's nothing.