Are You at Risk for Prediabetes?

Ninety percent of people who have prediabetes—including fit women like you—don't even know it. Here, how to tell if you're at risk and the simple steps you can take to turn your odds around.

By Lorie A. Parch 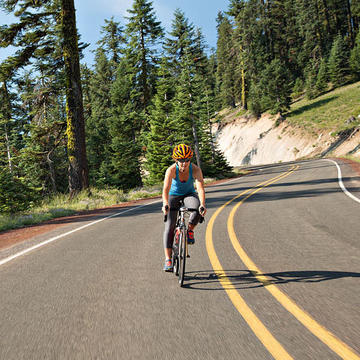 Working as a physical therapist in Talent, Oregon, Jade Wilcoxson treated diabetic patients every day, but she never imagined she could become one of them. At 28, she had an athletic build, loved to mountain bike and play soccer on weekends, and ate what she considered a pretty healthy diet. So in 2006, she was shocked when she got a call from her doctor's office after having blood work done during a routine checkup.

"My blood sugar was elevated," recalls Jade, now 36. Her doctor retested her a few times, but the results were conclusive: Jade had prediabetes, a condition that put her at higher risk for type 2 diabetes, a disease in which the body doesn't properly make or use insulin, the hormone that helps convert glucose into fuel for our cells. As a result, blood sugar builds up in the bloodstream and can damage nerves and organs. A prediabetes diagnosis means that has already begun to happen. Exactly why isn't known, but genetics, excess body fat and inactivity play a role.

Jade was devastated. She knew that if she got diabetes, she would be at an increased risk for high blood pressure, heart disease, stroke and kidney disease. The good news: Prediabetes is reversible. She could clean up her diet, as her doctor suggested, cutting back on simple carbs and alcohol, and step up her exercise routine and/or take drugs to manage her glucose levels.

"I worried that if I started taking medication I would become dependent on it," Jade says. "I wasn't ready to go down that route." She called her brother, Ryan, who suggested they train for a 100-mile bicycle race together as a way to exercise more consistently. "It took us about eight or nine hours to cross the finish line, but we made it," Jade says. Inspired, she kept training. "Once I started riding, I felt like eating better too," she says. After about a year, her healthier lifestyle had brought her blood glucose levels into the normal range—without drugs. Jade started racing for a local bike shop, and at 33, she turned pro, joining the Optum Pro Cycling team. In 2013 she was named USA Cycling Pro Road Race National Champion, and in July 2014 she sped down the Champs-Élysées in the Tour de France women's event.

Like a growing number of women who look and feel perfectly healthy, Jade didn't match the standard profile of someone wrestling with her blood sugar. "I do diagnose prediabetes in fit and healthy people," says Barrie Weinstein, M.D., an assistant professor of medicine, endocrinology, diabetes and bone disease at the Icahn School of Medicine at Mount Sinai in New York City. According to the Centers for Disease Control and Prevention, a staggering 86 million Americans have prediabetes—more than one in three adults over 20. Up to 30 percent will develop type 2 diabetes within five years. An estimated 39.5 million of them are women.

Even scarier, about 90 percent of those with prediabetes have no idea their blood sugar is going haywire. "The biggest reason we aren't catching it in more people is that there are no clear symptoms," Dr. Weinstein says. Only once it's full-blown type 2 diabetes are there signs: peeing a lot, feeling thirsty and very tired, and possibly experiencing unusual hunger, blurry vision or tingling or numbness in the hands and feet.

What Raises Your Risk

Jade had a major risk factor that many women ignore: Her family history. Her grandfather had the disease, and her aunt and uncle currently live with type 2. If you have a strong family history, that's likely going to trump being active, says Karen Kemmis, a diabetes educator in Syracuse, New York. You don't have to be very overweight or inactive to develop the disease. (Case in point: Jade's weight fluctuated, but even at her heaviest of 160 pounds, she was just one pound overweight for her 5-foot-7-inch frame, according to BMI charts. She has lost 20 pounds since her diagnosis.) The more immediate the family member who is diabetic—whether type 2 or type 1, which is typically diagnosed in childhood—the higher your risk. "With type 2 diabetes, if one parent has the disease, then your likelihood is double to triple the general population's," explains Greeshma Shetty, M.D., a staff clinician at the Joslin Diabetes Center in Boston. "If two parents have it, it's anywhere from four to six times the risk."

Keeping your weight in check does a lot to lower your chance of developing diabetes. Still, about 12 percent of people with type 2 diabetes are of normal weight. And working out doesn't mean you can eat with impunity. "You can't out-train a bad diet," says FITNESS advisory board member James Beckerman, M.D., a cardiologist in Portland, Oregon, and the author of Heart to Start. Although it's a myth that eating too much sweet stuff causes diabetes, sugar—a type of carbohydrate—does drive up blood sugar. We're not just talking candy and cupcakes. "Juices are a huge culprit," Dr. Weinstein says. "They can be a healthy meal replacement, but if you're not mindful of the carbohydrate content, you're just drinking sugar." And if you're subsisting mainly on carb-heavy meals like bagels, pasta and even tons of fruits and veggies, it can drive up your blood sugar if you're not also getting a mix of protein and healthy fats.

Certain gender-specific health conditions—such as polycystic ovary syndrome (PCOS), which strikes as many as five million U.S. women—can raise prediabetes risk as well. Giving birth to a baby weighing nine pounds or more also increases the odds, as does having gestational diabetes (GD), in which a pregnant woman develops diabetes, usually temporarily and probably because hormones from the placenta interfere with the production or use of insulin.

If you're already active and watch what you eat, small changes may be all you need to head off or reverse prediabetes. Here are nine ways to help keep your blood sugar in check.

Get tested. A variety of blood sugar tests can diagnose the condition. Be sure to request your actual results. "Some doctors may see fasting glucose levels in the low one hundreds as harmless, but at that stage, it's important to intervene," says Samuel Dagogo-Jack, M.D., the president-elect of the American Diabetes Association's Medicine and Science division.

Consider losing a few pounds. If you're overweight (check your numbers here), dropping 5 to 7 percent of your body weight is the best step you can take to reduce your glucose levels, according to research from the Diabetes Prevention Program (DPP).

Sweat often. A minimum of 150 minutes of moderate aerobic exercise a week helps reduce your chance of developing diabetes, the DPP found. In addition to cardio, do resistance training two or three days a week to build more muscle mass and improve your metabolism. Combine exercises that work multiple muscle groups—such as push-ups, rowing, lateral pull-downs, leg presses and wall slides—and perform three sets of eight to 12 reps until your muscles are fatigued, Kemmis suggests.

Cut back on liquid calories. That means soda, juice, energy drinks, sugary coffee drinks and alcohol, as well as sports drinks (save them for endurance workouts of more than an hour, Dr. Beckerman says). You don't have to survive on water alone, though. "A couple of diet sodas or a small glass of juice or wine once in a while aren't going to ruin a healthy diet," says FITNESS advisory board member Kathy McManus, R.D., the director of the Nutrition Department at Brigham and Women's Hospital in Boston.

Shake the sugar habit. Eat sweets like cookies, cake and candy sparingly and don't use them as a treat for exercising. Also, scan labels for added sugar. Opt for fresh salsa, a small amount of peanut butter on your toast, oil-and-vinegar dressing and plain Greek yogurt with berries.

Rearrange your plate. "The best strategy is to eat a balance of carbs, fat and protein—all are important to health," McManus says. Fill one-quarter of your plate with lean protein (chicken, turkey, fish, eggs), another quarter with healthy carbs (whole-grain pastas and breads, brown rice, beans, legumes) and the rest with vegetables. Incorporate some healthy fat (olive oil, nut butters, avocado) into your meal.

Talk to your doc if you've had GD. In addition to your postpartum visit at six to eight weeks, you'll need annual screenings afterward, Dr. Weinstein says. And make working out regularly a priority once your ob-gyn clears you to exercise. It can slash your chance of developing type 2 diabetes by 47 percent.

Don't ignore irregular periods. Bring them up with your ob-gyn, who can check you for PCOS, which in addition to elevating your prediabetes risk, causes weight gain, acne and excess facial and body hair, among other symptoms.

Check yourself. Go to diabetes.org/risktest for a quick online screening.