In Defense of Eating a Big Breakfast

A new study shows that chowing down on a high-calorie breakfast proves to have massive health benefits, especially if you're diabetic. 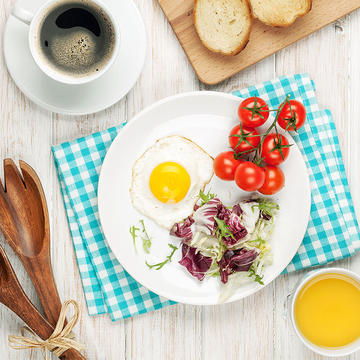 Bigger is better when it comes to breakfast, according to a new study published in the journal Diabetologia. The research found that eating a high-calorie morning meal and a smaller dinner helped curb blood-sugar spikes in diabetics—and the findings may apply to non-diabetics, too.

Researchers studied a small group of men and women with type 2 diabetes over the course of two weeks. Members of the study were split into two groups: The first ate a bigger breakfast and smaller dinner, and the second group did the opposite. After seven days, the groups switched. Blood samples revealed that glucose levels were lower throughout the day for those who consumed a bigger breakfast.

"Our body is controlled by day and night cycles," says Daniela Jakubowicz, MD, an author of the study and a professor at the diabetes unit at the Wolfson Medical Center at Tel Aviv University. As your body produces different levels of hormones throughout the day, your body responds differently to food. For instance, your blood glucose rises about three to four times more when you eat a slice of bread in the evening than it does in the morning, explains Jakubowicz.

Fueling up at the start of each day has similar health benefits for non-diabetics, according to Jakubowicz. "The body environment in the morning converts food to energy instead of fat," she says. "It also helps speed up metabolism and weight loss, and decreases hunger."

Here's how to make those A.M. nutrients work for you all day.

Get the right balance.

Monica Reinagel, a licensed nutritionist and author of Nutrition Diva's Secrets for a Healthy Diet, recommends eating at least 15 grams of protein and five grams of fiber, while limiting sugar to no more than five grams—sugars in fruit and dairy don't count.

Eat a little bit of everything.

Split up your calories.

"Calorie intake varies from person to person," says Nicole Silber, a registered dietitian at Middleberg Nutrition in New York City. "The key is to reserve 80 percent of your calories for meals and 20 percent for snacking." So figure out how many calories you should be consuming daily and front load them for your morning meal (around 600 calories).