Study: Can You Eat Pasta on a Wheat-Free Diet?

Does a new study give followers of a wheat-free diet permission to eat pasta? We investigate. 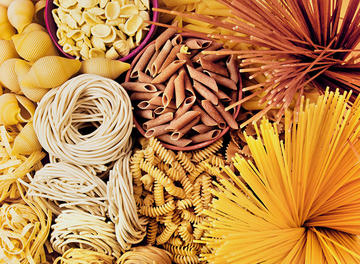 Following a wheat-free diet but missing pasta? Good news: Pasta might not affect wheat sensitivity as much as other wheat-based foods, according to recent research out of Italy (because where better to study spaghetti?).

Researchers set out to see how cooking affects various proteins—including gluten—in store-bought 100-percent durum wheat semolina. They found that some proteins that prompt immune responses leached into the cooking water during the cooking process and were lost. Although most of the proteins associated with celiac disease survived, researchers concluded that pasta may not trigger the same intensity of immune response as other wheat products, such as baked goods, in those who are sensitive to wheat.

But don't see this as a license to gorge on pasta if you have a wheat intolerance, warns Roger Clemens, DrPH, an adjunct professor at the USC School of Pharmacy, International Center for Regulatory Science, and past president of the Institute of Food Technologists. "There's additional need for real human data, and each person has a different immunogenic response," he says.

If you think wheat might be an issue for you, refrain from eating foods with wheat for a month. At the end of the month, have one dish with pasta. Then, don't eat any wheat for a couple of days. How did your body react? Did you have any digestive issues, uncommon skin breakouts, or unexplained fatigue? If so, then pasta isn't a good thing for you to eat. (But if everything felt fine, try these healthy pasta recipes.) Now, repeat the process with another wheat food, like bread.