5 Ways to Put Allergies Behind You

Stop the sniffles and sneezing once and for all. 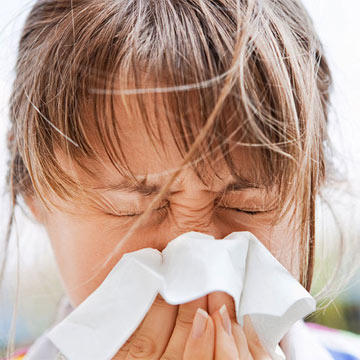 Feel like you've been sniffling and sneezing for months? No wonder. First the polar vortex spurred last spring's ridiculously high pollen counts, dubbed the "pollen vortex," making America's estimated 50 million (and steadily growing) nasal-allergy sufferers miserable. Now it's fall ragweed season, which the Environmental Protection Agency reports has grown longer due to climate change. Even worse: Research shows an astonishing 80 percent of people with nasal-allergy symptoms actually have some degree of year-round allergies. Cumulative exposure to allergens has sensitized them to indoor irritants, like dust mites, mold, and animal dander, resulting in chronic symptoms. If you're a seasonal sufferer, you're predisposed to cross to that dark side. "Adults with perennial allergies are among the most common cases I see these days," says Neeta Ogden, MD, an allergist in Hackensack, New Jersey, and a spokesperson for the American College of Allergy, Asthma & Immunology.

To find out if your allergies have settled in for the long term, check out these five surprising symptoms -- plus doctor-approved ways to banish them.

You look like you sparred in kickboxing class.
Under-eye bags big enough to tote your gym gear are no surprise after a sleepless night. But if you're well rested and sporting two full-on black eyes, you probably have what docs call "allergic shiners," courtesy of histamine, a chemical your body creates in response to allergens. "When histamine is released, blood vessels in the nose and face become 'leaky,' causing dark circles under the eyes and a bruised appearance," says Jordan Pritikin, MD, head of the Chicago Nasal & Sinus Center.

Feel better: Take an antihistamine and apply a washcloth soaked in cold water or a cloth-wrapped ice pack for 10 to 15 minutes a few times a day to reduce the underlying inflammation, Dr. Pritikin says. The swelling and discoloration should fade within seven days but could return if your allergies flare up again. Pop your antihistamine as needed for prevention.

You've developed an odd new wrinkle.
Dubbed the "allergic crease," it's a light horizontal line across the lower half of your nose caused by constantly, and often unconsciously, rubbing it with your palm to relieve itching. "The allergic crease is a sign of long-standing nasal allergies," says Mark Holbreich, MD, an Indianapolis-based fellow of the American Academy of Allergy, Asthma & Immunology. The bad news: You can't get rid of it. Luckily, you can stop it from getting worse.

Feel better: Retire the "allergic salute" and use tissues to always blow, not wipe. Treating your symptoms with allergy meds, such as Nasacort Allergy 24HR, may help eliminate the irritation that drives you to rub in the first place.

Your. Head. Is. Killing. You.
Beyonce may wake up flawless, but you, my dear, rise to a brutal headache. "When allergies cause swelling in the nose and impair nasal breathing, the small openings to the sinuses may become blocked as well," Dr. Pritikin says. "Mucus and air trapped in these spaces can trigger pain in the forehead, between and behind the eyes or in the cheeks." These headaches are often misdiagnosed as migraines, but you'll know your agony is allergy-related if it's accompanied by congestion, the sensation that your ears are blocked or postnasal drip.

Feel better: Dr. Pritikin suggests popping an antihistamine-decongestant combo, such as Zyrtec-D, in the morning (it can cause insomnia). The "D" is for pseudoephedrine, which narrows the blood vessels in the nose to relieve pressure. Run a humidifier in your bedroom to soothe swollen nasal passages, but be sure to keep your home's humidity level between 30 and 45 percent. Any higher allows mold and dust mites to thrive and can make your symptoms worse.

You're itchy all over.
Blame histamine. "It irritates small nerve endings in the skin, triggering itching," Dr. Pritikin says. You don't even have to touch an allergen; the response can result from the same exposure that causes you to sneeze.

Everything tastes like sawdust.
Sunday dinner, a PB&J, spicy tuna rolls: all bland, thanks to your stuffed-up nose. Flavor is a combo of both taste and smell. "If the nose is congested due to allergic swelling, airflow into the upper part of it, where scent is detected, is reduced and sense of smell is affected," Dr. Pritikin says. People whose chronic inflammation has caused nasal polyps -- growths in the lining of the nose that can block the airway -- can lose the sense permanently.

Feel better: Use a saline nasal spray like those by Ocean to flush out your nose; research shows that doing so decreases allergy symptoms, including congestion. If that doesn't do the trick, see an allergist to be checked for polyps. If you have them, your doc may prescribe antibiotics, oral steroids or a steroid nasal spray to help restore your sense of smell.