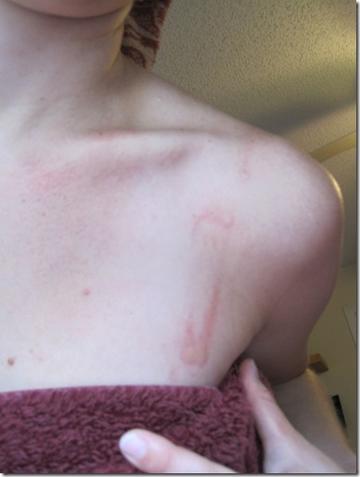 In my mind, I look like a gazelle when I run... grace, strong, and steady.  In reality, I'm sweating buckets, snot is pouring down my nose, and my thighs are chafing.  Running is one of my favorite forms of exercise, but it isn't always pretty.

The top 5 running gross-outs include:

Told ya running could be gross.

Let's tackle the first gross-out: chafing. Chafing occurs when your body rubs against itself (like between your thighs or your breasts) or when your body rubs up against your clothes. Chafing hurts a lot and can actually sideline you for a few days if it gets really bad.   The odds you'll chafe are greater if you're a salty sweater or are dehydrated, have sensitive skin, are running for a long time, or your clothing is worn or has exposed seams.

I chafe like no one's business during the summer because I am a very salty sweater when it’s hot outside.

There are several remedies for chafing:

To read my solutions for running-induced snot, blisters, and - of course - urges to go number 1 and number 2, head over to Healthy Tipping Point:  How to Handle 5 Common Running Gross-Outs.

Caitlin blogs at Healthy Tipping Point and Operation Beautiful.  You can follow her on Twitter at CaitlinHTP. Her second book, a guide to healthy living, was just released this past May.