Making Peace with the Dreadmill

Dreadmill. While it’s not in the dictionary, I would guess that most runners are familiar with that made-up word--a combination of the feeling of dread and the torture device that we know as a treadmill. The first time I ran on a treadmill, I was so bored I wanted to shoot myself after just 5 minutes. I couldn’t even fathom running a single mile on a treadmill, let alone MILES (plural). I have no idea what possessed me to fork over $700 for the modest hamster wheel that I bought, but it was a hot day, and I thought, “Anything is better than running in this heat!” Anything except the dreadmill, I quickly learned. Over the past couple of years that I’ve been a runner, I’ve avoided using the treadmill like I avoid taking my kids to Chuck E. Cheese’s on a Saturday. Or returning something to Wal-Mart the day after Christmas. Or…well, you get the picture. (click to keep reading...)

Living in Michigan, the weather changes at the drop of a hat. It’s not unusual to have your furnace running at night and then switching it to the central air during the day. I would choose to run outside in any weather over the treadmill—freezing cold, wind, rain, heat, hail, tornadoes (yes, even tornadoes). Bring it on! 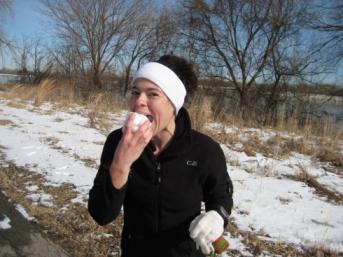 So imagine my excitement when my sports doctor told me that due to my knee injury, I should run on a treadmill instead of out on the concrete. His exact words were, “A track is better than concrete, but a treadmill is better than a track.” I actually debated which was worse: running circles around a track for miles on end, or running on the treadmill. I was desperate to make my knee heal as quickly as possible, so I listened to the doc’s advice and turned my runs over to the treadmill. I knew I couldn’t just run and stare out the window for six miles, so I had to get creative. My TV was impossible to hear from across the room with the treadmill running, so I wanted to set up my laptop to play The Bachelorette respectable shows on Netflix. The only thing I could find that was high enough to perch the laptop was a cat tree (for my FOUR cats). I dragged the cat tree in front of the treadmill and set my laptop on top. It was directly in my line of vision, just a couple of feet in front of my face—perfect! That run was still boring, and seemed to go on much longer than necessary, but after it was over, I realized that I wasn’t limping. My knee was feeling good! As I continued my runs on the treadmill, I developed a whole system—set up the computer on the cat tree, pick a dramatic interesting show, set up a fan to blow right on me the entire time, have a bottle of ice water in the cup holder, and make sure my kids had everything they needed before I got started (they’re notorious for asking me for something the instant I press the start button). Over the span of a few weeks, I started to look at the infamous “dreadmill” in a new light—and focus on the positive things I was getting out of it: *Little to no knee pain. *Air-conditioning when it was 100 degrees outside. *Not having to wear a hydration belt to carry water. *Not having to use a porta-potty in case of emergency. *Not worrying about having someone to watch my kids while I go out for a run. *Catching up on trashy reality shows without guilt. *Controlled and consistent pace, which is nice for speed workouts. *Not having to wake up at the crack of dawn to run before it gets too hot. While I can’t honestly say that I enjoy the treadmill more than running outside, I do have a new appreciation for it, and I don’t dread my workouts on it anymore. Even after my knee is healed, I will probably willingly do some workouts on the machine I used to despise. Besides, my cats haven’t seen this much entertainment since we found a mouse in our kitchen! 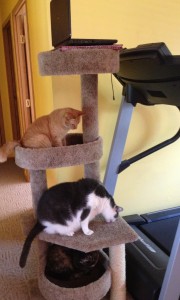