We Tried It: Doonya Fitness Party

If you think Zumba is fun, you’ve got to try Doonya. This Bollywood-inspired dance workout made me sweat – and smile – a crazy amount (smiling has to burn a certain number of cals, right?).  And when you feel like it’s one big party, like I did last week when I attended their first-ever fitness dance party, the culturally-inspired moves will have you grooving like it’s your job.

Co-founded by Priya Pandya and Kajal Desai in 2011, Doonya (which means “world” in Hindi/Urdu) is a cardio and strength-building fitness class matched to the beats of the latest Bollywood-inspired music. It’s totally taking the fitness world by storm, and got its first big push into the spotlight back in 2008 thanks to the hit song “Jai Ho” in Slumdog Millionaire. My class was two hours long – definitely plenty of time to get a hefty burn in – but I consider that a consolation prize (not a bad one, mind you) because it was So. Much. Fun. 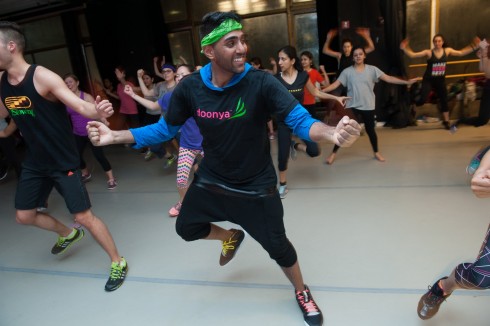 On my way into class, admittedly, I was a little nervous. I grew up taking dance classes, so I knew I was coordinated enough. I’d also taken my fair share of Zumba classes, meaning I’m pretty familiar with dancing for fitness, rather than style and grace. But I had never taken on something quite like this. It wasn’t a genre I was at all familiar with. I didn’t know if I was going to be able to catch on quick enough or if I was about to make a complete fool of myself.

But as I joined about 40 other Doonya-goers at DANY Studios in downtown New York City for an all-out dance-a-thon, I realized it was just about having fun and getting fit. We started off with a quick warm-up to get our heart rates going and then the dancing began. Bollywood dance features a lot of high-energy movements. It’s not just leg lifts and shoulder twists, but hand gestures and arm movements too. You’re working your core, arms and quads, all at the same time. It’s a great way to get a full body workout and have some fun. Don’t get me wrong, I love hitting the gym as much as the next fitness fanatic, but sometimes it can get old. It’s nice to switch it up with a fitness class like Zumba, and now Doonya, too!

Interested in trying it out yourself? They have classes in New York, Washington D.C. and Houston. They’ve also held events in Los Angeles and hope to head over to India in the near future. Keep your eye out!

We Tried It: Equinox’s Flow Play

We Tried It: Reaching the SUMMIT at Exceed Physical Culture