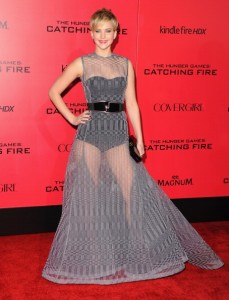 It may be considered an unlucky number, but this year was far from it for celebrities, bringing out quite a few OMG post-baby bodies, weight loss wonders and a new crop of A-list abs. Below, check out the celebs who lunged and lifted their way onto our best bodies list this year.

1.    Penelope Cruz: The Counselor star welcomed her second child, daughter Luna, in July and popped back up on the red carpet in amazing shape just three months after giving birth. She credits following a Mediterranean diet, dancing, and chasing after her kids for getting her back into shape after both pregnancies.

2.    Jennifer Lawrence: To prep for Catching Fire, Lawrence tackled agility drills, sprint intervals, medicine ball exercises and cardio on a stationary bike to get in kick-ass Katniss shape. On top of her healthy workouts she has an even healthier outlook on body image. Admitting that in the past she was threatened with being fired if she didn’t lose weight for certain roles, she refuses to diet, saying, “I’d rather look chubby on screen and like a person in real life.”

3.    Sandra Bullock: It’s hard to believe that the star of this year’s hit Gravity is 49 years old. So what’s her secret? She mixes it up with a cardio and strength training combo for an hour a day, six days a week.  Her sweaty staples include Pilates, kickboxing, weight lifting, and running or biking when she’s traveling.

4.    Kerry Washington: The new mommy-to-be and Scandal star was recently named People’s Best Dressed of 2013. To get her stylish shape, she doesn’t obsess over the number on the scale. Instead, she does Pilates, which she says helps her focus on her appearance in healthy ways while also slashing stress. As for her diet, she loves shopping at farmer’s markets and enjoys fresh food that makes her feel good.

5.    Scarlett Johansson: The Don Jon and newly engaged star was recently named Esquire's “Sexiest Woman Alive” for 2013, making her the only two-time winner in the magazine’s history. When she’s not preparing for a role, she hits the gym twice a week and tends to favor weight lifting and core exercises over cardio. “To be honest, I work out like a guy!” she’s admitted in the past.

6.    Julia Louis-Dreyfus: It seems that every year the 52-year-old Veep star keeps getting fitter and fitter. A self-proclaimed exercise junkie, she recently stated, “I think I’m addicted to the post-workout high,” and stays in shape by hiking with her family, doing toning exercises on a BOSU ball and logging miles on the treadmill.

7.    Amanda Seyfried: Being constantly active has its perks, like being ready for a body-baring role in Lovelace at a moment’s notice. Conscious not to promote an unhealthy body image, Seyfried said that she didn’t diet at all for the film. “[Linda Lovelace] was really thin but I don’t have the same body type as her. If I stopped eating, I would look gross.” Instead, she stuck to her usual routine, which consists of running outside and eating healthfully by filling up on veggies during the day.

8.    Christina Aguilera: The Voice judged returned to the show this year missing something big–49 pounds! Her slim-down secrets included totally revamping her diet, ditching alcohol, dairy and carbs and taking some personal time away from the show to get active outside more with her son.

9.    Allison Williams: Marnie showed a lot of skin in Girls this year, so Williams made sure to get in top shape for season two. She credits being brave enough to bare her bod thanks to sweaty sessions at Core Fusion Barre and SoulCycle, as well as full-force hour-long workouts with celebrity trainer Reggie Chambers.

10.  Katy Perry: The singer stays in Roar-ing shape by making sure to eat well-balanced meals that include things like fresh-pressed juice, chicken and quinoa to keep her energy levels up, especially when she’s on tour. “I think making my body feel good boosts my confidence,” she has said about her workout routine. She prefers to sweat outside whenever possible by biking around New York City or going for a hike.

11.  Blake Lively: The new face of L’Oreal Paris (Editor’s note: We’re not sure why it took so long for someone to take ownership of those gorgeous tresses!) has been busy this year getting ready to launch her own lifestyle company, which will help followers “live a one-of-a-kind unique life.” To keep her one-of-a-kind figure in shape, Lively keeps it simple–she stays active throughout the day, starts her mornings with a cup of hot cocoa and ends her night with a few dark chocolate squares. That’s a routine we can get down with!

12.  Paula Patton: The Baggage Claim actress got a lot of attention this year thanks to hubby Robin Thicke’s summer hit “Blurred Lines”—and for good reason! Patton frequently trains with celebrity trainer Jeannette Jenkins, doing a mix of Pilates, yoga and sculpting exercises, to get her killer curves.

13. Carrie Underwood: She’s the new face—and voice—of the NFL Sunday Night Theme Song but the country star is also known for her gorgeous legs. Her secret? She runs, kickboxes and strength trains with resistance bands. She also keeps a food journal to track what she eats. Good thing then that she loves to grocery shop. “It makes me happy to have a full fridge and a full pantry,” she said.