The Scary Stats You Need to Know on Secondhand Smoke (Whether You Smoke or Not!) | Fitness Magazine
Skip to main content

The Scary Stats You Need to Know on Secondhand Smoke (Whether You Smoke or Not!) 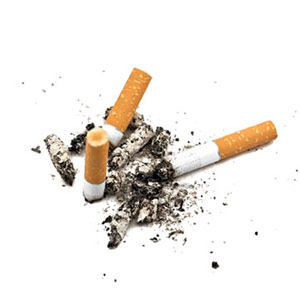 According to the Center for Disease Control, more than 440,000 Americans lose their lives every year to smoking related illnesses. On top of that, for one death, 20 more live with serious illnesses from smoking and 8 million Americans suffer from chronic diseases caused from smoking. With stats like these it's not surprising that 70 percent of smokers say they want to quit.

This sparked the CDC to launch the first anti-smoking campaign funded by the U.S. government, Tips from Former Smokers. Due to the response and success of the campaign the CDC is launching a second phase this month, with more personal stories from smokers and how the habit has hurt their health, their family and their lives. We got the chance to chat with Dr. Tim McAfee, director of the CDC's Office on Smoking and Health on how smoking affects more than just the person doing it, and how you can help a friend, family member or yourself quit for good.

This campaign if pretty graphic. What made the CDC decide to go this route?

This campaign is the first that the federal government has funded since the 50thAnniversary of the first Surgeon General's report in 1964, although separate states have run campaigns consistently. We felt that we needed the ads to get a visual point across so we could be a counterweight to the tobacco industry's promotion. They are spending $8.5 billion a year on promotion, so it's a steep climb to compete with. This is not something you can do once and then it’s done with, people need to hear it and see it regularly to really register with them.

With this phase of the campaign we address several conditions linked to smoking, although there are so many more. We have a story about diabetes and smoking, as well as someone with COPD and someone who suffered serious lung damage from secondhand smoke exposure. The first time around we stuck to the impact of smoking on the smoker, this time we're focusing on the impact on those around a smoker.

Even if someone isn't a smoker, why are these ads important to watch?

Because we still have a lot of room to go in terms of exposure. We found from the first ads that they had a profound effect on nonsmokers. A large number of them ended up talking to someone close to them after seeing it to help them stop.

How many people are affected by secondhand smoke a year and what are the dangers of it?

Exposure in public places has been going down but there are still a very large number exposed in remaining states that have not passed ordinances banning smoking in public places and at home. This is a problem especially for children. Secondhand smoke causes 50,000 deaths a year in the U.S., most from heart disease and lung cancer. For someone who has a preexisting heart issue, secondhand smoke exposure can lead to a heart attack or other cardiac event. Dozens of studies have been done in communities that eliminated secondhand smoke exposure and they all have shown a decline in emergency room visits.

If you do know someone who smokes, how can you help them stop?

Every situation is different, but you should keep in mind two issues if you have a close relationship with someone who smokes. First, nobody should feel bashful in his or her right to breathe free air. Most smokers are pretty respectful of this but you still should make it known that you don't want them to smoke in the house or near you if you are out.

Second, let them know that you want them to stop smoking because you care about them. Bring it up in context rather than out-of-the-blue nagging. There is a recent study where the New England Journal of Medicine looked at 100,000 smokers and found people who smoke are cutting 11-12 years off of their life expectancy. But they also found if you quit in your 30s you get ten years of your life expectancy back. If you quit in your 50s, you'll get four to five years. There's not much else that has much more control on how long you are on the planet. It’s no small thing, and the sooner they quit the better off they'll be.

For more information, tips and help visit cdc.gov/tips or all 1-800-QUITNOW.