We Tried It: Hot Power Yoga 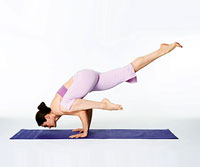 Even though the FITNESS staff is made up of a bunch of sweatsetters—we love trying the latest classes!—we’re going to reveal a little secret: A few of us totally got our butts kicked from “om” to “namaste” at Pure Yoga last week. The web team had signed up for “a little field trip,” aka a hot power yoga class during lunch. And even though the Pure Yoga staff could've mopped the floors with our drenched workout clothes afterward, we still loved it! Read on for the editors' reactions:

Hot Power Yoga made me feel: A little nervous at first, but then super energized when I left the class. I skipped my 3 p.m. coffee without even thinking about it!

During class, I learned: You have to give your body time to adjust. During a tricky bridge pose the instructor sat down next to me and told me he used to be a mountain biker and spent most of his time hunched over riding. After practicing and stretching regularly, his muscles eventually loosened up to yoga. Being a runner, this gave me hope that with a little practice my limbs could loosen up enough to master a bridge one day as well.

Hot Power Yoga made me feel: Sweaty, flexible and strong. The poses were challenging enough that the class was never boring.

During class, I learned: Hot yoga can be fun from time to time, but I’d probably opt for traditional power yoga. It’s fun to mix it up, but I think I am better able to focus on the poses rather than the sweat dripping into my eyes!

Hot Power Yoga made me feel: More flexible and ready to stretch into deeper poses.

During class, I learned: I had to work on my posture more. Our instructor helped me adjust my form for a few poses and reminded me that it’s been a while since I’ve gotten a good yoga class into my workout routine. I’ll be back for more!

Hot Power Yoga made me feel: Detoxed. It was great because if I'm sweating that much, it's probably because I'm overdoing it with cardio. I liked getting the toxins out without feeling nearly nauseated!

During class, I learned: Some really cool poses. It was a lot of fun!