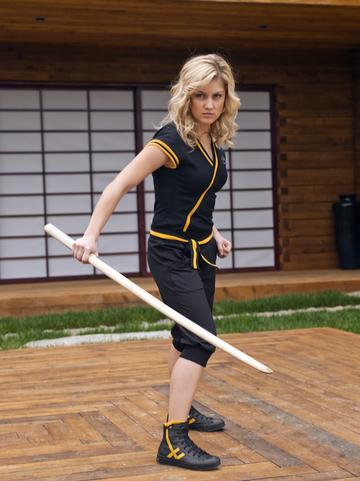 Brittany, as the yellow Power Ranger, shows off her fierce side before taking on the bad guys. (Photo courtesy of Saban Brands)

As one of the stars of Nickelodeon's Power Rangers Samurai, Brittany Pirtle is able to fuse her love of acting with the fitness skills she learned spending 14 years as a competitive cheerleader. She plays Emily, the youngest and most naive of the team. But her character grows as the season progresses, keeping the team together during tough times. Since I was a devoted Power Rangers fan when the show first debuted (I still can't believe the franchise has been around for 20 years!), I was intrigued when I heard that the Rangers are now aiming to take on a big opponent: childhood obesity. The show recently launched the emPOWER program, in partnership with the Alliance for a Healthier Generation and the William J. Clinton Foundation, to inspire kids to get fit and healthy. Brittany told me more about emPOWER and her own exercise habits.

Were you a fan of the series as a kid? Totally. My cousin and I were really into Mighty Morphin Power Rangers [which aired from 1993-1995]. We were quite a duo and would pretend like we were the characters on the show!

You were a competitive cheerleader for most of your life, and even performed at national and world championships. Do you still cheer? I'm not competitive anymore, but I did get to use some of the skills when I acted in Bring It On: Fight to the Finish. I still cheer with friends at open gym and go to stunt classes. I'm hoping to maintain those skills as the years progress!

Besides the stunts on the show, how do you stay fit today? I love Bikram Yoga. I do it everyday to stay grounded and centered emotionally, spiritually and physically. A few times a week, I also run three to five miles along the beach in San Diego to clear my mind. The great scenery is really motivating.

Can you tell me more about the emPOWER program? How can people get involved? We have a commercial out now promoting the program and teaching kids new exercise moves. Basically, we're trying to give kids positive reinforcement and inspire them to get active. If they see us being fit, they will want to as well. At powerrangers.com/empower, you can find videos, fun activities and even kits for schools that want to participate.

More from FITNESS: There's more than one way to inspire a fit kid! Here are eight smart tips to raise healthy youngsters.