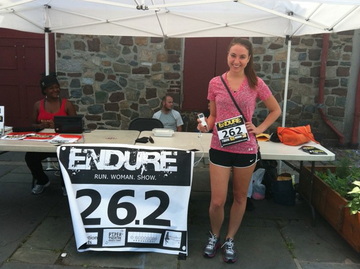 Danielle prepares for the active adventure!

Despite extensive Googling, I had no idea what to expect from Run Woman Show in Brooklyn’s Prospect Park on Saturday. It turned out the “interactive athletic theater” is as conventional as it is searchable. “We don’t want people to know exactly what they’re getting into,” one crewmember, Suchan, told me. “It’s part of the fun.” Following pre-emailed instructions, I arrived armed with sunscreen and my favorite Nike running shoes. Suchan handed me a marathon-style number bib and an iPod loaded with audio instructions. “Okay everyone,” he announced to me and a dozen other intrigued participants. “We have to press play at the same time to make the next 75 minutes work. Get ready to hit on three!”

We must’ve looked bizarre silently following Suchan’s brisk-paced lead and a witty female voice in our heads. The voice, which belonged to Canadian playwright Melanie Jones, told us to relax and be present—a marathon begins with a single step. “Run Woman Show allows you to move while you experience art,” said Jones, who began writing the MP3 script last September. “You’re running with the narrator.” After completing four marathons and an Ironman, she found creative inspiration in the everything-you’ve-got devotion her training demanded. “I was on the road running for hours at a time, and in my head, I noticed all the human emotions you could possibly imagine: rage, bliss, peace, despair,” she said. “As an artist, that’s incredibly rich dramatic ground to draw from.”

The result (not to give anything away) is an adorable, hilarious and at times emotionally searing story about an embattled young woman’s gateway to peace: running. “I think a marathon is a great metaphor for life,” Jones said. “It can be awesome and it can be awful, but we all have to get through it.” Along the show’s three-mile stretch, I belly laughed. Among other bits of candid hilarity, Jones relayed a race anecdote about a time when, uh, nature called. And I’ll admit it—I also cried. But in the end, when our audio heroine crossed the finish line, I felt inspired to pick up the pace in my own life. Run Woman Show is about pushing through the pain and taking strides with joy. You don’t have to be an uber-athlete to appreciate that. Find out if Run Woman Show is happening near you at runwomanshow.com.

More from FITNESS: Running with a buddy makes time fly! Here are seven ways for finding your perfect exercise partner.