Kate Walsh on Inspiring Exes, Fragrance, and Her Favorite Workout 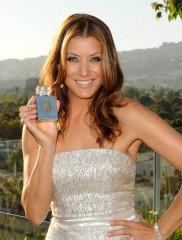 One might assume that actress Kate Walsh is all business—she plays a doctor on ABC’s Private Practice, after all. But in real life, she’s a super-friendly, could-chat-for-days girl’s girl with a long-time love for fragrance. Her first scent, Boyfriend, debuted last year and now she’s launching her second, Billionaire Boyfriend ($75, sephora.com). Kate called me up to talk about her latest (and much wealthier) perfume, beauty must-haves, and how she maintains her toned physique.

The inspiration: “I had this idea years ago when I was shopping at Jeffrey in New York. I recently had a break-up with a boyfriend. I missed him and I missed his scent and I felt very empowered. I was like, ‘You know what? I’m not going to have a boyfriend; I don't need a boyfriend. I’m going to go to the men’s fragrance counter and just find something.’ And then I thought, ‘Boyfriend, boyfriend. Wouldn't that be a great name for a fragrance?’ I was inspired by “boyfriend” and what that connotes and girls talking about their boyfriends and their memories. I wanted to create that memory and that immensely sexy feeling that I had from the memory of a boyfriend.”

So there’s “Boyfriend”…“When we first started to make the original Boyfriend fragrance, I was like, ‘Well I remember my first boyfriend’s cologne in high school—Polo Ralph Lauren. I didn't want it to smell like that, but I remember that feeling of going out on a date and coming home and having the smell on my shirt. I wanted the woodiness in there, but I really wanted it to be feminine. Fabulous perfumer Mary Pierre Julien came up with the formula, which had a floral top note with patchouli, amber, and sandalwood.

And now there’s “Billionaire Boyfriend”… “At the same time Boyfriend was developed, I had ideas for subsequent boyfriends. So Mary Pierre Julien developed this other fragrance, which became Billionaire Boyfriend. Both of them were crazytown good, but I was really obsessed with Billionaire Boyfriend. It’s an oriental floral. The only continuity from the original Boyfriend line is the woody dry-down. We called it ‘Billionaire’ because it was so luxe and indulgent with exotic fruits (like tangerine) and florals (like jasmine and gardenia). It’s spoiling yourself with decadence and luxury and having it be accessible—you don't have to actually be a billionaire to have that fantasy.”

She’s always been a sucker for fragrance. “When I was in high school, I think the first perfume I got was Jessica McClintock. I remember saving up my money to get it. It was a spring floral and it was really beautiful. I was kind of a tomboy, but I always loved jewelry and perfume.”

She believes that bronzer is magic (we agree). “My makeup artist Sergio Lopez-Rivera is amazing and magical and he is a genius with skin. Even though I go out in the sun, I wear sunscreen. But Sergio taught me the magic of a good bronzing powder for the face. I love Nars Bronzing Powder in Laguna—it gives you a little warmth.”

She lets her skin breathe on days off. “When I’m not working, I try not to wear tons of makeup. I do use Kate Somerville products. I use her sunscreen and all the products in her skincare line because they work for me.”

She’s got her eye basics down. “There is a Laura Mercier Eye Basics in Peach—I put that on the lid. That’s another trick that Sergio told me. So even if you’re not wearing makeup, per se, you just kind of rub it in and it gives your eyelid a little warmth and pop. I’m also a huge fan of mascara and I love the Make Up For Ever Lengthening Mascara.

She doesn’t hit the gym to stay fit. “I take my dogs out walking and hiking. I like to be outdoors when I’m not working. I do Pilates and I also recently started doing ballet, which has been great. I’m not a huge runner so the ballet has been amazing because it gets your heart rate up, so it’s cardio. It’s also great for posture and alignment.”

She’s a smart snacker. “I have a theory of why people go for the bad food, myself included—it’s easier to eat. Potato chips are easier to grab than, say, grilled chicken and vegetables. But I like baby carrots and I’ll take them in a little Ziploc bag or have them in my trailer at work. Or almonds, but I like them roasted or smoked like tamari almonds.” —By Cody Marick, beauty intern