The Olympic swimmer discusses his devastating groin injury, body hair struggles, and his plans to take a major break from swimming post-Rio. 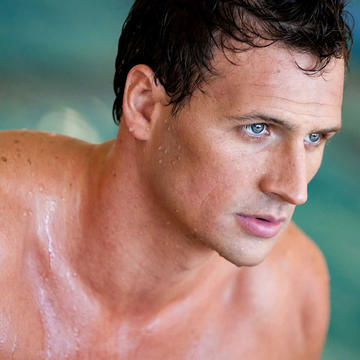 When we had the chance to chat with 11-time Olympic medalist Ryan Lochte, we jumped on it. Not only is the swimmer America's goofy heartthrob, he also proved he can come out on top—even as an underdog. At the USA Swimming Olympic trials earlier this month, Lochte beat out Michael Phelps in the 200-meter individual medley semifinals despite nursing a groin injury that forced him to drop multiple events. After officially securing his spot on Team USA, Lochte chatted with us about everything from his newfound discovery of vegetables to Zika worries and his plans post-Rio.

Fitness: How do your feelings going into your fourth Olympics at 32 compare to your first in 2004 when you were only 20?
Ryan Lochte (RL): I feel like it's one of my first Olympics. It's a new team, new country. I'm not nervous. I never get nervous—if anything, I get excited to compete. But I do think of myself as an underdog this time around just because of the times I've been posting and the fact that I haven't been dominant in the public eye or in the swimming world. I've fallen since 2011 or 2012. After 2012 I just got too confident, and I was too sure of myself that I was the best, and that messed with my head a little. I really haven't been touching the times I was during the last Olympics, so now that I'm getting closer to Rio I think that's helping because it makes me hungry every time I go to practice. I'm going in with a purpose to be the best instead of already knowing that I am.

Fitness: How are you dealing with the groin injury? What's the recovery been like?
RL: I pulled my groin during the first race of Olympic trials doing a weird kick in the water. It was an aching pain throughout the entire trials. It was so frustrating because I trained nonstop every day for four years for this one moment and some things you can't control. But I've been doing lots of exercises for those muscles and massage therapy and it's been feeling a lot better. By Rio I know I'll be 100 percent. I'm realizing that maybe it was a blessing in disguise because I have less events to worry about. Instead of five, I'll be focusing on two like I did at my very first Olympics.

Fitness: Have you changed your fitness and eating routines at all since the last Olympics?
RL: Well, I switched swim and weight coaches, and I've started listening to my body more as I get older. I used to eat junk food and drink soda all the time, but now I've cut that all out and am focusing on eating healthier. Before you would have never seen anything green on my plate and now I love and am enjoying salads and broccoli! I've noticed a big difference in my energy level and have found I'm a lot happier.

Fitness: I understand you've also changed one of your grooming rituals?
RL: That's been one of the key changes. Swimmers spend countless hours the night before a meet shaving our entire bodies and we always end up cutting ourselves and wasting time when we could be resting. I also used to get really sore from bending my body over to shave. But I discovered Syneron Candela's Gentle Laser Hair Removal and after three treatments I don't have to worry about shaving anymore or hair growing back, and I'm a lot smoother. It was painless and I was in and out. As an Olympian you have to surround yourself with the best and I think this is definitely the best option out there. (Ed note: Lochte is a brand ambassador for the company.)

Fitness: What is your ritual before an event to get into the zone?
RL: It depends. Sometimes I try to get pumped up and other times I stay calm, but one of my favorite songs I listen to is Lil Wayne's "Sky's the Limit." That always gets me smiling and in race mode.

Fitness: Obviously talk of Zika has been nonstop. (There's even been talk of anti-Zika condoms!) Are you concerned at all?
RL: No, not at all. The United States Olympic Committee has done a really good job of informing us about Zika and all of the dos and don'ts to prepare ourselves. They've taken all the precautions—like making us sleep in nets—so we can just worry about what we're there to do. Every Olympics there's always something that makes everyone scared or freaked out, but it's always fine when the Games start. I think they're blowing this out of proportion and it's freaking out everyone.

Fitness: Is the hookup atmosphere in the Olympic Village really as intense as people make it seem?
RL: You always hear the stories—last Olympics they gave away 25,000 condoms in days!— but you really don't see athletes just hooking up in the middle of the street. As far as I'm concerned, I see the bed, cafeteria, and competition pool. We're not there to have fun. You've come too far to have something distract you.

Fitness: In another interview you mentioned that you recently signed up for Tinder. What has that experience been like so far, especially as a celebrity?
RL: I haven't been on it that much because my biggest relationship right now is with the swimming pool. I'm definitely on it. But I like meeting new people. It's something I've started getting used to—I have to assume everyone knows who I am.

Fitness: Any good pick-up lines?
RL: No, no cheesy pick-up lines! I don't have any of those. My opening line is usually just "hey" with a smiley face.

Fitness: What are your post-Rio plans?
RL: I plan to stay for a couple days after—all I want to do after is just go to the beach and relax. After that I'm really just looking forward to taking a vacation. I've never taken one because there was always something I had to do for work. So I've never been able to turn my phone off and disconnect and be away from the world. It'll be nice to sit down and take a deep breath and not have to worry about waking up for morning practice and finally get my mind off of swimming. Since I was eight years old, the longest break I've ever taken from swimming is maybe a month. Now I'm 31, going on 32. So it's definitely about time where I mentally get away from the sport. I definitely need that. Who knows if I'll keep swimming or not. I told myself I'd stop once I stop having fun, but I'm having a blast right now. So I can't say this will be my last Olympics.