Does this mean that time travel is actually a thing? 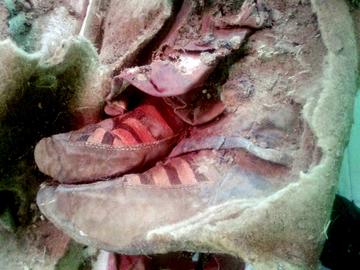 It Girls Gigi Hadid and Kendall Jenner might have made Adidas sneakers a monster fashion trend, but apparently someone else beat them to the punch... 1,500 years ago.

Deep in the Altai mountains of Mongolia at an altitude of 10,000 feet, archaeologists recently found the partial remains of a mummy buried over a millennium ago. "This person was not from elite, and we believe it was likely a woman, because there is no bow in the tomb," B. Sukhbaatar, a researcher at Khovd Museum, told The Siberian Times.

Only the woman's arms and feet were recovered, but that was enough to spark internet time travel theories. Why? Well she seems to be wearing a pair of trainers with the iconic three-stripe Adidas logo. Considering the first pair of Adidas surfaced in 1949, it's highly unlikely that these speculations are true. But c'mon, this woman was flaunting some seriously nice kicks for her time, right?

Experts are—unsurprisingly—not entertaining the idea of time travel, but they're still excited about the discovery because it gives them insight into Mongolian life during that era. "The grave was three meters deep. The finds show us that these people were very skilled craftsmen," the researcher said. "It is the first complete Turkic burial at least in Mongolia, and probably in all Central Asia. This is a very rare phenomenon."